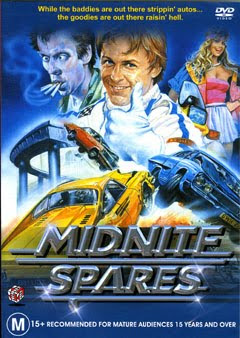 
Steve (Laurie) is a young race car driving man who believes his father Red was kidnapped or perhaps killed by gangsters. Steve wants to get to the truth, but first he must prove himself in the world of "sprintcar drivers". Meanwhile he and Ruth (Carides) get together romantically. His team is called "Team Rat" and the movie Midnite Spares primarily revolves around this world and its crazy denizens, including the comic relief team of soot-encrusted Wimpy (Spence) and his friend Rabbit (Argue).

What's interesting about 'Spares is that it is a character piece. It is a slice-of-life sort of thing that revolves around the interpersonal connections between the characters. There is a lot of quirkiness going on here. But while the movie takes time and care with the characterizations, and that is nice, the public probably will come to 'Spares seeking the car stunts and action scenes. There are some real gems, including a car that lands on another car and blows up, but the movie is about people, really.

There are a lot of interesting and wacky details, such as the main hangout for the characters, Grubb's Grub, and the overall feeling of the car-racing underbelly, as expressed through all the garages, warehouses, mechanics, grease monkeys, racetracks, chop shops and junkyards we see. Max Cullen plays Tom, the man who repaints all the cars and always has paint on his face and gives Steve some of the info he needs. John Clayton plays Vince, the head of the car-theft ring. The aforementioned Wimpy brings a lot of color and humor, and the rubber-faced Spence does a fine job bringing this character to life. 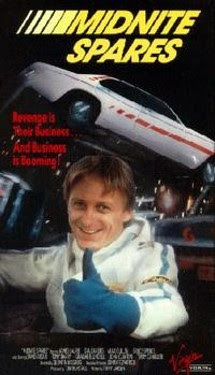 There is some good car mayhem at the end, followed by a sitcom-style multiple freeze frame setup of highlights from the movie while the end credits roll. The catchy soundtrack includes the gem "Love Is The Law".

Something like a less-intense version of Paul Verhoeven's Spetters (1980), we recommend Midnite Spares if you are looking for something different and more character-based. It's definitely not your average brainless crash-em-up. Released in the U.S. on Virgin Vision, try Midnite Spares for a quirky detour.

Good review. It is definitely an odd Aussie film. Every scene with Spence and Argue is great. Maybe great isn't the right word.

Thanks! This was pretty decent, not perfect...but fun!