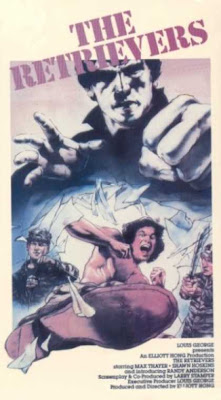 AKA: Hot and Deadly


"The Company" is an elite team of top-secret mercenaries who go around the world dispensing death in a ruthless manner. When nice guy Tom Cattrall (Thayer), who is an unassuming TV repairman and resembles author Stephen King, gets ensnared in this dark organization because they want his wiretapping skills, he soon gets on their bad side. A former member of The Company, Danny Burke, wrote a tell-all book about their dirty dealings and now The Company is after him big time, and Tom and Danny's sister Jan (Hoskins) have fallen in love. As if that wasn't enough, Tom and Jan enlist a book publisher and a cadre of hobos they hired to rent out an abandoned warehouse and SELF-PUBLISH Danny's book. Can they finish the book and get it out to stores in time? Or will they all fall prey to The Company's nefarious tactics?

In the first five minutes of The Retrievers we get some classic staples some movies don't have in their whole running time: the classic neck snap, guy falling out of a guard tower, fan favorite decapitation (this time with garden shears) and someone yelling "noooooo!" -- that's what's good about The Retrievers - it's fan-pleasing fun from start to finish. 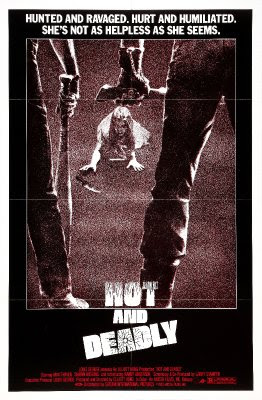 Even though the film was released in 1982, it has a pleasant 70's feel to it and the movie does resemble Death Machines (1976) in many ways. It has some funky tunes on the soundtrack and shag carpet graces many floors in the film, among a lot of other 70's decor and clothing. We loved that alone, but it's also violent, fast paced and has plenty of funny dialogue. What's not to love?

It is worth noting that there is a last-minute character we all love, in the vein of Bear, Machine Gun Joe, The Dead Man and The Cowboy (Maximum Force (1992), Provoked (1989), Chains (1989) and Maximum Breakout (1991) respectively) - this time it's a morbidly obese man named Big Mac (can they do that?) he eats apples and throws them at bad guys. Also tuba music plays when he walks. Fat guy humor for ya. Go Big Mac!

There are some cool moviemaking techniques used in The Retrievers: hand-held camera for some fight scenes and some tastefully-done sped up action. There is a very cool montage during the bookmaking sequence. It ends on a freeze frame as all action movies should. Also in the credits there are some interesting things: Katey Sagal of Futurama fame sings the stirring end credits song and future Road House (1989) director Rowdy Herrington also gets a credit. And in case you wanted to know who played the "Wetbacks", that's there too. "WETBACKS" gets a credit!!!! We didn't make that up, it's an actual credit. You won't see that again in these PC times.

This seems like it would have played at drive-ins at the time. It was also released on Vestron in the 80's. Sure, it falls prey to some low-budget trappings such as seeing the boom mike/mike shadows, underlit scenes and some terrible acting/non-acting (watch out for the book publisher saying "your work ethic is terrible")...but The Retrievers is cool, entertaining fun that 80's action fans should love. It would make a great double feature with Kill Squad (1982).

Comeuppance Review by: Brett and Ty
Posted by Ty at 5.9.10