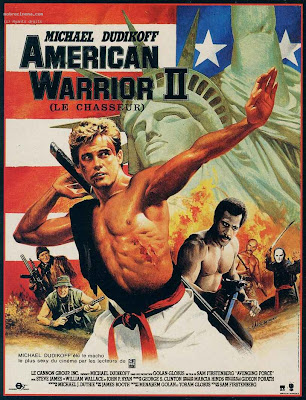 
Here is a prime slice of Dudikoff/Cannon action from the golden year of 1986.

It seems a nefarious, underground organization called "The Pentangle" are plotting to rule the world. In their spare time, they go into the woods and hunt human beings. The mastermind of it all, Professor Elliott Glastenbury (John P. Ryan) is a snobby, elitist racist who physically resembles Johnny Cash. Commander Jeb Wallace (Karl Johnson) is his second in command and looks like a cross between Jesse Ventura and G. Gordon Liddy. There's also crazed redneck Charlie Lavall (Marc Alaimo) and Wade Delaney (William Wallace). When they do their hunting, they wear masks - Mardi Gras Mask From Hell, S&M Leather Dude, Kabuki Ninja, and Evil Indian, respectively.

The baddies even have a Dudikoff Doppelganger for their side - a blonde pretty boy! I guess they figured if they want to win, they should have a Dudikoff too, but he's no match for the original.

Meanwhile, good-natured Army Intelligence Officer Capt. Matt Hunter (Dudikoff) just wants to relax on his family farm and wear his cowboy hat and Bolo tie. He's off spending some quality time with his young sister Sarah (Alison Gereighty) and of course Grandpa (Rick Boyle), as everyone calls him. When the Pentangle goes after Hunter's close friend and former Secret Service Partner Larry Richards (James) because he is a Black man running for Senator, Hunter snaps into action! After further attacks on both the Richards and Hunter families, including the kidnapping of Sarah, it's time to unleash the AVENGING FORCE of Matt Hunter! 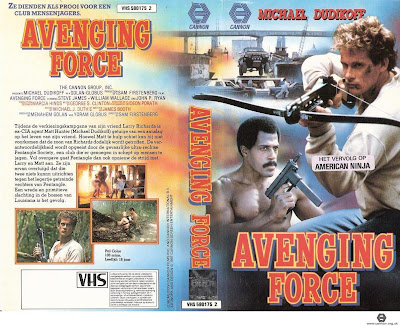 Dudikoff and James have really good chemistry in the film, and it's refreshing to see them actually working together in a friendly way, with no bickering. We liked that. Too many "team-up" movies feature the lead good guys squabbling the whole time - but not here. Larry Richards is what's needed in Washington right now - what you might call an "Action Senator"! Sure, he's running for Senate, but if needed he'll rip his shirt off and shoot bad guys! 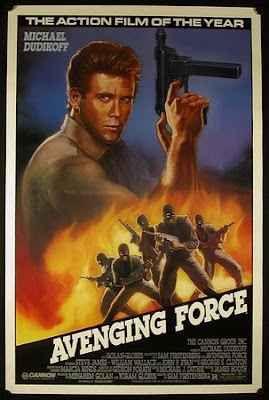 Another big plus, besides the good character development (especially between the Hunter and Richards families) is the high level production values. The movie looks great, especially when it captures the New Orleans flavor. From the Mardi Gras city scenes, to the deep-in-the-Bayou climax, everything is top notch. Director Firstenberg is an experienced action director and it shows. Once again Kane Hodder appears in the stunt department. All the actors, from Grandpa on down have unique personalities. And it doesn't skimp on the action. It's all good.

Both foreign and domestic box art is awesome. Check out the detail in the U.S. VHS released by Media - you can see each bad guy's individual mask! 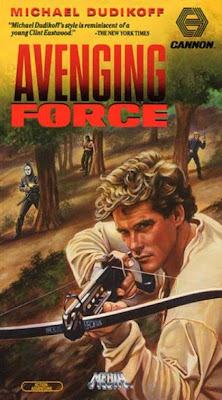 Yup this movie looks gold, picked up the R4 dvd not long ago. I'll report back once I've watched it!

Definitely look forward to your opinion!

My only qualm was that they killed of Steve James-- I would've loved to see them keep kicking ass together, especially with that chemistry you mentioned above. Still, overall a great time.

I agree with you on that! The more Steve James, the better!

If he didn't die, they could have ended the movie on a badass freeze frame with them fist-bumping or saying a one-liner at the same time.

This is a lofty statement, but this is one of the best of the mid 80's period. It's extremely brutal, with women, children and innocent bystanders slaughtered mercilessly, always a great trademark of an action classic. Dudikoff is at his best here and surrounded by true hams like James Booth and John P. Ryan it's unbeatable in my opinion. Killing off James was a surprise, but it's good to see Dudikoff take down the Pendragon or whatever they're called. The only downside is Dudikoff struggling to beat Ryan in the climatic showdown. How would that old bum ever stand toe to toe with Dudikoff in his prime? A minor quibble mind you.

We agree 100 percent! This is Dudikoff and James at their absolute best.

Ryan was a bit old to be fighting Dudikoff, but it was a lot of fun to watch. Haha.

They should have had Gorilla Monsoon call the action in the square mud puddle. Belly to belly suplex, backbreaker, and lots of illegal choke holds and below the belt infractions. C'mon ref!

Haha! That would've been great.

Totally agree! The Pentangle shouldn't have 'tangled' with Matt Hunter!