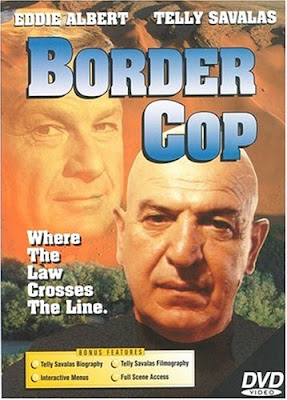 AKA: The Border, The Blood Barrier


Frank Cooper (Savalas) is a tough guy working border enforcement on the Mexico border. He seems to have an ambivalent attitude about letting illegals cross over, preferring to take naps and let them cross. He is very close to his 20-and-out retirement. When his partner is injured and he gets a new one, Hale (Robin Clarke) he doesn't understand his ways. Cooper has plenty of clashes with Commander Moffat (Albert) - mainly because Moffat is corrupt and in bed with Chico Suarez (Gazzo).  Suarez is an unpleasant and merciless Coyote, spiriting illegals into the USA to work at very unpleasant jobs where they are abused by the management. 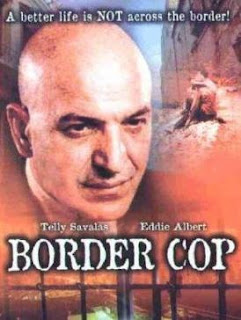 One of Cooper's best friends is a young man named Benito Romero (De La Paz). He's a scrappy kid who just wants to have a good life with his new wife Leina (Camacho), so he ends up working for Suarez. Unfortunately, he gets trapped and can't come home. He and his compatriots are abused by their gringo bosses and Romero is seen as a troublemaker. Once Cooper gets wind of what's going on, he tries to sort out the situation in his own way...meanwhile Romero wants to get revenge on his captors. Is that possible in this dangerous world?

Without Telly, there would be no movie. That's really the bottom line. While this is a dark, somewhat violent drama perfect for the drive-in era, only Telly's charisma saves the movie from utter mediocrity. In one of the more interesting turns in the film, Romero and his friends are forced to work in an abattoir - and there are graphic, extended, documentary scenes of cows being slaughtered, skinned and gutted. Why we need to see this, I don't quite know.

Illegal Mexicans come in strapped under a car Sideshow Bob-style at the beginning of the film, and that's when all hell breaks loose. Eddie Albert is a classic actor (not to be confused with Punchy himself, Edward Albert), whose career goes at least back to the 1930's. His role is fairly small, but important and he fills it well. His partner in crime Suarez is played by another classic actor, Michael Gazzo. Despite having a long and fruitful career, his name should be more well known. If you haven't seen it yet, please check out the movie Fingers (1978). He's in it and it's a great film.

Despite its flaws, mainly that the plot isn't as cohesive as it could have been, and could have used some more action, Border Cop is a relevant, serious movie that Telly fans should check out.

Now this sounds quite interesting. I'll have to check this movie out.