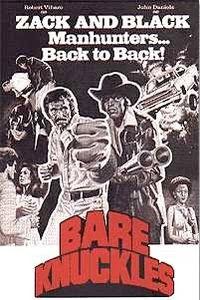 
Drive-in genius! In this gem, Zachary Kane (Viharo) is the strong, silent type who is also a scrappy, street-smart bounty hunter. He always gets his man. But he faces the ultimate challenge when a crazed, hissing, sadistic serial killer begins abducting and killing women on his home L.A. turf. So Kane teams up with Black (Daniels) to find the culprit, searching through the seedy sides of the city, but finding ample time to seduce the ladies, mainly Jennifer (Jackson). What is the secret of spoiled rich brat Richard Devlin (Heit), and his sidekick/sparring partner Kido (Jace)? Will Kane be able to put 2 and 2 together before it's too late?

Bare Knuckles is so great for so many different reasons. They truly don't make 'em like this anymore and the movie industry should be ashamed. It is loaded with 70's atmosphere, from the disco-like soundtrack to the fact that 90% of the men in the movie have a mustache. It defines the pre-political correctness era, with an awesome hero who smokes, drinks and does whatever the hell he wants.

Top-notch grittiness ensues on a technical level and it all has a low-budget guerilla feel to it that works perfectly. Sure, there are some imperfections that naturally come from underground filmmaking, but they are more than made up for by all the movie's strengths. Namely, the street-level, 70's feel and the character of Zachary Kane. There were no sequels or TV series spinoffs for the Kanester, but we should have seen more of him in some way.

Robert Viharo as Kane is brilliant. The taciturn, David-Heavener-like style, the fact that he is a man on a mission that knows what he wants, he is a boxer (great training sequence) and he even plays the flute! He's so smooth he even picks up the main love interest Jennifer while chowing down on some Pizza Hut in the parking lot. Needless to say, we loved Kane.

Director/writer Don Edmonds, known primarily for the two official Ilsa movies, here was in a state of grace and he should be more known for Bare Knuckles than he currently is. Although there are some people in the know. Not surprisingly, Quentin Tarantino is a huge fan and has memorized verbatim dialogue from various Edmonds movies.

For a fun ride through the 1970's with a film with its heart in exactly the right place, we strongly recommend Bare Knuckles.