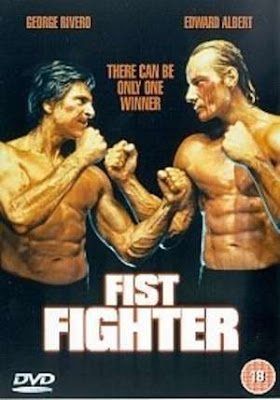 
"There can be only one winner."

C.J. Thunderbird (Rivero) is a drifter who closely resembles disgraced Massachusetts Senator John Kerry. He's going south of the border because he received a telegram informing him that his friend died at the hands of a mysterious fistfighter named Rhino Rhinehart (Hues). Along the way, he wrist-wrassles a few meatheads and gets in a few barfights. He makes it to Bolivia and enters the underground fighting world, with the aim of defeating Rhino. He befriends a gregarious promoter named Punchy (Albert). The fights are controlled by corrupt gangster Vance (Mike Connors), who is in bed with the local authorities, so he has Thunderbird sent to prison.

While there, there is yet more underground fighting, this time in a cage. Enter: The Beast, a hairy, Robin Williams-like creature that murdalizes everyone in the ring. The evil warden Moreno (Simon Andreu) promises Thunderbird his freedom if he defeats The Beast. Will Thunderbird prevail? Will he get his one shot at Rhino? What will happen to Punchy? How much fist-fighting can one human stand? Find out tonight!

Thunderbird has a cute dog, played by "Kelly". He steals the movie. He out-acts everyone and could easily be the new Benji. You really care about his plight. The other characters all have great/silly names: C.J. Thunderbird, Rhino Rinehart, The Beast, and "Harry Lang Moses" AKA, of course, PUNCHY.

During the prerequisite training sequence, instead of a Rocky-like pounding, inspirational rock tune, it is Punchy talking a mile a minute to C.J.

C.J. is never seen without his stonewashed jeans, even in the ring. Did we mention he is a dead ringer for John Kerry? If you've ever wanted to see the windsurfer-in-chief punch and fight his way to freedom, this is the movie for you. 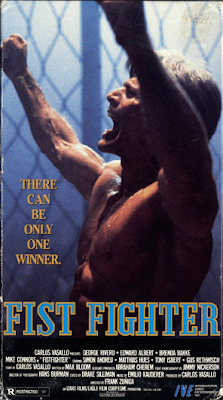 The addition of the character of The Beast is welcome because it is so crazy. It is never explained if he is some kind of genetic mutation or just an angry, hairy dude. It is reminiscent of the exploitation gem La Bestia In Calore AKA S.S. Hell Camp (1977).

Fan Favorite Matthias Hues puts in an accent-drenched performance as Rhino. He is always welcome and has a charming presence, even as a bad guy. He lets his fists do the talking and wears some oversized suits. We all love Hues.

Despite a slumping, sagging middle section, Fist Fighter is a worthy addition to the bare-knuckle, underground meathead genre.

This looks like a fun one. I've seen a couple fist-fighting movies and even though every one is the same as the last there is a reason we keep going back to them, isn't there? Perhaps it is because we know exactly how it will play out and for some reason we need that?

That is so true Sutekh! We need all the fun clichés of a fist fighting flick: hero, evil brute, training and final battle!