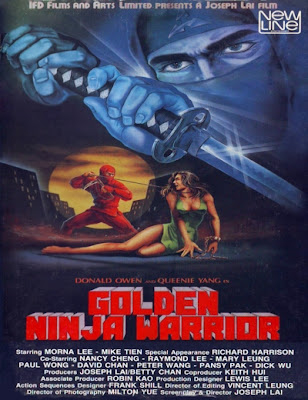 Directed by: Joseph Lai (and an uncredited Godfrey Ho)

For those unfamiliar with Godfrey Ho, he has made some of the silliest, craziest movies of all time. He would make a bunch of movies around the same time and slice and splice bits of them all together. Add to that some outrageous (and hilarious) dubbing, and crazy special effects and inventions, sped-up action and a complete and total disregard for formal moviemaking techniques, the result is usually a surreal experience literally like no other. His chosen medium for all this during the 80's was the ninja movie. It's not for everyone, but it's original.

The "plot" (not that it matters to the filmmakers, or the audience) seems to be about a rivalry between the Golden Ninja Warriors and the Red Ninja Warriors. The Red Ninja Warriors want a Golden Ninja Statue that the Golden Ninjas Have, which is never seen by the audience. Then, the action moves to Hong Kong where we see a criminal organization running a prostitution racket, made up of kidnapped women, out of a hotel. They beat and torture the girls, until the organization is broken up by Sherri (Yang), a model and female Kung-Fu expert nicknnamed "The Death Fairy". She dismantles the operation with the help of Michael (Owen). They transform into ninjas at random times. They must fight the evil, cackling boss Mr. Lau and his evil female ninja Sakura. Also, Sherrie wants to avenge the death of her father, on top of getting the mysterious statue into safe hands...(?) 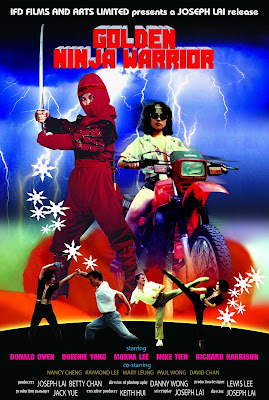 Attempting to write and describe what goes on in Golden Ninja Warrior is an exercise in futility, but the above is my best attempt. Again, the plot, such as it is, is not important in the slightest. Try to imagine a sleazy exploitation movie with zero continuity (or any attempt at it, apparently), ninjas disappearing and reappearing randomly in clouds of yellow smoke, loud, nonsensical dubbing, all sped up, keystone cops style...not just the action scenes...most of the movie!

Richard Harrison appears only in the opening credits sequence (lifted from another Ho feature, believed to be Ninja Terminator, 1985). Owen has a camouflage ninja suit and weird powers, on top of all the other nutty, zany effects. The ninja sequences are the best in the film, but you never know when they will appear! An Asian man, obviously in Hong Kong, shouts on the phone that his name is "Bill Brown"! 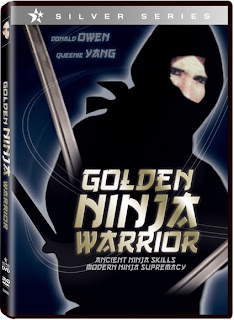 The movie is REALLY silly. It's impossible to describe. My attempt at trying to communicate its utter cinematic insanity is just feeble; you must see it for yourself. It's an outpost of cinema most people don't touch. For those in the right frame of mind, Golden Ninja Warrior (as well as other Ho movies, such as the excellent Clash of the Ninjas, 1986) has a lot of laugh-out-loud treasures in store.