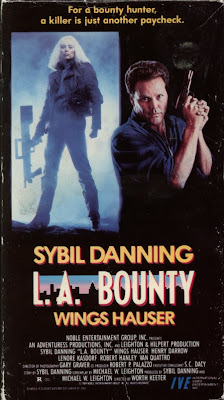 Here we have a fun little film which is easy to like, in which Sybil Danning has not only the starring role, but also is credited with story and co-producer.

When mayoral candidate Mike Rhodes (Robert Hanley) is kidnapped by drug runner Cavanaugh (Hauser) and his team of goons, this raises the ire of one of the toughest dudes around...ex-cop and now bounty hunter Ruger (Danning)! It seems the psychopathic Cavanaugh murdered her partner when she was on the beat. Cavanaugh slipped away and she has been on his trail. Now it's time to get revenge. But Cavanaugh wants to get to her first or she'll blow the whole mayoral kidnap plan, especially since Ruger has teamed up with Rhodes' wife Kelly (Lenore Kasdorf).  So now it's an all-out war between Cavanaugh and his goons and Ruger. Is she woman enough to take on all the evildoers? And what is the final twist in the tale?


In this movie, Danning and Wings are great opposites. Wings Hauser hams it up to the max (in a good way) and chews the scenery to pieces as the flamboyant artist Cavanaugh. It's truly "Wings gone wild" as he laughs, screams, skips (!) and spouts philosophy while wearing his clip-on earring. His lair is a supposed import/export business called "Gothic Imports". In the climax we see it has to be one of the largest warehouses ever.


Danning is quiet and curt as the no-nonsense bounty tracker. She says very little and when other characters say things to her, all we see is a silent, closed-mouth reaction shot. It's all in the name of fun. Just check out her many great entrances in the film. She usually appears silhouetted in a doorway surrounded by smoke as a mighty guitar riff blares on the soundtrack. She probably had a blast as the beer-swilling, leather jacket-wearing, trailer-dwelling, shotgun-toting "macho" hero. She basically blows giant holes in all the goons with a massive gun. She is funny and engaging as Ruger. 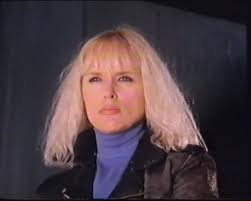 The movie really delivers the goods to the fans and moves along at a brisk pace. There is a standout scene which is an homage to Westerns, watch out for it.  Directed by familiar name (at least to this site) Worth Keeter, don't hesitate to check out L.A. Bounty if you can.

I was trying to figure out what my next Wings film would be, and I think I've found it. Very hot.