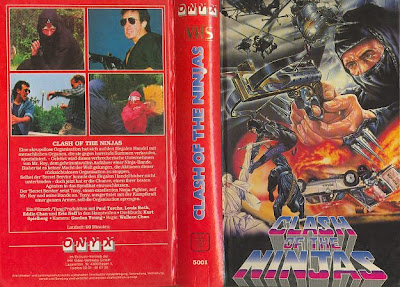 
Less a movie, and more the demented hallucination of a kung fu movie fan who watched an all-night marathon of martial arts films while on LSD, and then asked to vomit up his insane ramblings on to celluloid, “Clash of the Ninjas” is one of the pre-eminent cult Chinese action movies out there. It puts other sought-after, supposedly similar titles like Karate Cop (1991) to shame.

The plot (????) concerns a white guy with a beard who looks like Tom Green who is actually a secret ninja. His name is Mr. Roy, and he is the head of an underground organ-stealing ring, and presides over a boardroom of baddies who take his orders. He speaks into an “intercom” which is really just a portable cassette recorder. By day, he wears a suit. By night, a black ninja outfit emblazoned with his “secret” corporate logo, three diamonds. It bears a very strong resemblance to the Mitsubishi logo. This may be some thinly veiled criticism of Mitsubishi, and corporate life in general, as this is clearly a message movie.

There are on-site surgeries, where eyeballs are taken out of skulls and put into jars and other organs are harvested. “Clash of the Ninjas” was clearly ahead of its time in this regard, as it was many years ahead of such movies as The Harvest (1992) and Repo Men (2010).

After many years of success with this venture, the “human guinea pigs have started rioting!” and there is a slave revolt of sorts. While the organization is still reeling from this setback, the authorities send in Tony, a dude whose dirt ‘stache and mullet are as wicked awesome as his fighting skills.

He teams up with the token black character to bring down Mr. Roy’s organization. We know Tony is good at what he does because when two thugs who look like the late Heath Ledger and Ed O’Neill take on the salt-and-pepper team, they are quickly dispatched. But it’s also personal for Tony, as Mr. Roy, being the total bastard that he is, killed his beloved mentor, as we learn in a flashback. So now it’s Tony Vs. Mr. Roy in a no-holds-barred (some holds that you’ve never even considered are not barred) fight to the finish – and what a finish!

Where to start with how awesome this one is, especially the last 20 minutes? First off, there is the dialogue, which really is just a loud mishmash of nonsensical phrases. Aside from the aforementioned criticism of the human guinea pigs, other standouts include: “I like to wrestle through my days!” and, extolling the virtues of his TV, another character jovially yells: “two channels, watch it a lot!!!!” and those are only a few examples. If we had the time and the space, if we transcribed all the dialogue from this movie, you would laugh your ass off.

Also, on top of some great 80’s touches, like scenes of aerobics and racquetball, and a surprising amount of blood and gore, this exercise in pure cinema silliness includes a disappearing ninja with “pew pew” laser noises, unscary white guys in black hoods, car chases, wacky fight scenes, funny outfits, hilarious sound effects, dubbing and music, a gun that turns into smoke, a ninja whose head spins 360 degrees, and a bravura effect where a ninja’s sais shoot flame. I won’t give away the ending but I’ll just say this…WATCH THE ENDING! 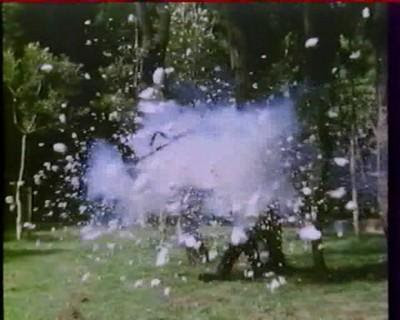 Clash of the Ninjas should be much more well-known. It probably got lost in the shuffle during the 80’s ninja boom. There were so many movies with the word “ninja” in the title on video store shelves of the time, this diamond stayed in the rough, except among a select few in the know. For pure action entertainment, I don’t believe it’s possible to do better than Clash of the Ninjas.
Don’t wait until tonight, watch it right now!