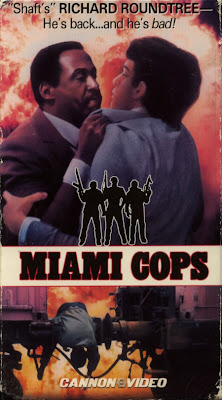 
The great Richard Roundtree portrays Gamble, a jaded detective working the mean streets of Detroit. He is teamed up with rookie Bobby Delaware (Muller Jr.). It seems Delaware became a cop because his father, Philip Delaware, was killed while trying to take down some killers/drug smugglers and they got away. Now the junior Delaware wants revenge. But it doesn't come quickly, and now the seasoned cop and the naive rookie go around town stopping baddies, while Delaware incrementally finds answers about his father's death. Eventually their quest takes them to Italy where the final showdown occurs. Will Gamble and Delaware be able to settle the score?

Directed by Alfonso Brescia, a man with a long career in the Italian film industry and infamous somewhat for his hackery, one of the first things you'll notice about Miami Cops is that...it doesn't take place in Miami! Nor does Miami come into the plot or dialogue in any way shape or form. This is clearly an Italian knockoff attempt at Miami Vice, but it was too little too late at that point in time, and Gamble and Delaware are no Crockett and Tubbs. At least Delaware is no Crockett.

Even the name "Delaware" smacks of an English-as-a-second-language attempt at writing a name that sounds "American". The logic is airtight, just name him after a U.S. State! Add to all that some silly dubbing, dingy film quality and the fact that the movie seems way longer than it actually is does not bode well. It's just pretty run-of-the-mill with no surprises. But on the good side, we have the charismatic presence of Richard Roundtree to keep the whole venture afloat...barely. He does what he can, but he's only one man. Is his winning personality enough to fight against all the other mediocrity around him? Only you can be the judge, and it depends on how big a Roundtree fan you are. Sure, he's so cool, his maroon blazer matches his maroon car (have you ever color-coordinated with your vehicle?) but it does make him look like a realtor. Speaking of his suits, he has a really snazzy gold number that he puts with his extended cigarette holder to go undercover at Chassy's Disco (apparently a real Detroit location). It makes him look like he is going to be in a Sam & Dave tribute act. Roundtree is by far the best thing about Miami Cops.

In the clothes department, main baddie Curtis Grover (possibly Grover Curtis) can't compete with Roundtree's awesome suits, all he has is a pale purple sweater and silly shades. And as far as Delaware's concerned, all the other cops haze him about his stylish, well-tailored suits. Luckily, an obese man named Uncle Andy comes to his defense. He was buddies with the elder Delaware. Once the other cops hear this, they begrudgingly give him some respect.

Released by Cannon, Miami Cops is too long (or it least it feels that way due to some of its blandness), and it desperately could have used a bit more originality, but Roundtree and the smooth sax on the soundtrack are present and accounted for.

Ha, Great review. That greatest part in the Bar scene at Chasis disco. It is a laugh that they argue about who is going in for the undercover bust right in front of the club as if real cops wouldnt have all that figuered out ahead of time. Then when Gamble goes up to the door to ring the bell he pushes on the Deadbolt (you can see it is a deadbolt lock & not a doorbell when the door is opened by the euro trash bouncer). Then he plays it all cool & nods his head to the music & starts shouting "Wheres MEELO" not exactully the way to be low key undercover about it. To top it off a great fight scene, but how does delaware manage to guess which room the fighting is in & how does he get up to the 2nd story from the ground?

I see you studied Miami Cops really closely which is commendable! One day maybe you'll join the ranks of Miami Cops.