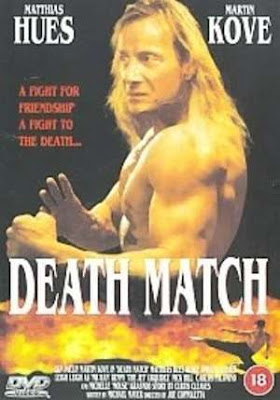 For our 400th review celebration, we thought we'd invite a few friends over - namely, Matthias Hues, Richard Lynch, Jorge Rivero, Ian Jacklin, Renee Ammann, Martin Kove, Benny The Jet, Eric Lee and the rest of the large cast of Death Match. A special effort seems to have been made to get as many of the DTV actors of the time as possible in this production. Casting-wise, it truly was The Expendables (2010) of its day, and, inevitably it means that some cast members can only receive small roles. Due to time restrictions of course. Unless you think Death Match should be a four-hour-plus epic.

John Larson (Jacklin) and Nick Wallace (Hill) are just two blue-collar dock workers trying to make their living the old-fashioned way - by working hard. Their longshoreman jobs take them all around the country, and they end up in L.A. where Nick tries to make some extra bucks fighting in...wait for it...illegal, underground punch/kickfighting cage matches to the death! Did you think it would be some sort of computer game contest? Anyway, Nick starts fighting for the evil, unscrupulous fight promoter/gangster/gunrunner/lover of geodes and Twizzlers Paul Landis (Kove) and his associate/main fighter Mark Vanik (Hues). Unbeknownst to Nick, these guys are, well, evil and unscrupulous, and they expect the winners of their fights to kill, and the losers of their fights to die. Seeing as Nick is a nice guy and doesn't have that killer instinct, he refuses to kill his opponent in the ring. So naturally, after a brutal punch to the face by Vanik, they imprison him on their personal boat.

Seeing as how Larson and Wallace are best friends to the end, when Larson gets word that his buddy hooked up with Landis' organization and is now missing, he goes on the hunt for him. Of course this means that he has to join Landis' group and fight in order to get closer to the truth. Luckily, he was a former kickboxing champion that gave it up years ago. With help from reporter/love interest/eye candy Danielle Richardson (Ammann), scrappy street kid Tommy (Michele Krasnoo), and of course his Cosmo Kramer-like manager Lionel P. Bigman AKA "Big Man" (Bob Wyatt), will Larson find and rescue his friend?

Death Match is one of the better punchfighters out there, and has a little more substance than most. Thanks to the sprawling cast - there are even more B-movie names we didn't mention - Lisa London, John Sjogren, Brick Bronsky, Marcus Aurelius, Sheila Redgate and more - as well as the fast pace of the film, things never get boring. Also in the good news department, this is by far Ian Jacklin's best role we've seen. He actually does a good job carrying the movie, and as the lead role must have the usual barfights and torture scenes, and you care about him and his friend. Despite all we've seen before, we really liked Jacklin here.

But the real "Big Man" in this production isn't Lionel, it's the great Matthias Hues. He turns on his typical charm and wears a gigantic suit with a bolo tie. If he starts to take off his shirt/bolo tie - watch out. You are in trouble. Also, whatever you do, don't call him "goldilocks". Lynch steals the one scene he's in as the gangster Jimmy. Benny The Jet appears as himself, in one of his own gyms, as Larson's trainer. His advice comes in handy. Interestingly, in the female reporter wanting a story/hero teaming up with an L.A. street kid angle, Death Match resembles Streets of Rage (1994) of all things. Weird.

We really can't go through all the many characters and their ups and downs due to space restrictions, and there are some of the prerequisite silly moments, such as the "Chicanos with nunchuks" scene, but honestly this is an action B-movie fan's dream come true - and one of the better killfighting movies we've seen to date.

Note: Death Match is available in the U.K. on a two-for-one DVD with, strangely, The Robert Chapin classic Ring Of Steel (1994)! Go Figure.

Congratulations on hitting post 400! I have a ways to go yet! I picked this up from Amazon on it's star power alone for a whole two cents (plus shipping). Love me a good punchfighter and Matthias Hues is the man.

Death Match is a lot of silly fun and Hues is at his best!

Congrats on 400 too. At this pace you'll be past me too. As far as Death Match, a great cast, especially with Hues and Kove. You can't go wrong with that for number 400.

It is one of the best B-movie casts ever! Gotta love Hues and Kove! I would love to get your opinion on the movie!

Found this one in my closet on a swedish ex-rental DVD! Have been meaning to sell it for a long time but now, i´m gonna keep it.And watch it,of course :)

That is cool you found Death Match!

One has to be careful with the UK DVDs. Older martial arts movies are often cut. Death Match is shortened by 5 seconds according to www.bbfc.co.uk
I agree completely with your review. Great movie.

I wonder what was cut? The BBFC needs to respect Matthias Hues and punchfighting.