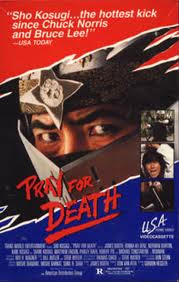 Pray for Death is awesome! It's certainly the best Sho movie we've seen to date.

Herein, the Sho-master plays Akira Saito, a man who has a nice, calm life in Japan working as an executive for Yokohama foods. He has a pretty wife, Aiko (Benz) and two cute kids, Takeshi and Tomoya (Shane and Kane, regulars in their dad's movies). Yep, the dude has a pretty sweet setup. Apparently bored by all the serenity, Aiko, whose father was American, convinces Akira to move to the U.S.  Once there, they begin refurbishing an old, run-down eatery called the Sabine Street Restaurant. They later rename it Aiko's. They get the property from a kindly elderly man, Sam Green (Parley Baer). Even though the newly-transplanted Japanese family in the U.S. throws themselves into turning the restaurant around, a dark secret lurks...

It seems the local gangsters have been using an all-but-abandoned back room at the Sabine Street Restaurant as a drop off and pick up for various illegal goods. When the highly valuable Van Atta necklace goes missing, naturally these dum-dum gangsters think it is the new immigrant in town, Akira. So they start making his life a living hell, tormenting him in many ways. It eventually escalates to the point when half the family is in the hospital. The ringleader of all this awfulness happening to the Saito family is one Limehouse Willie (Booth). While his name seems more suited to hobo boxing matches in the railyards, the diabolical man uses every possible underhanded tactic at his disposal to try to eliminate Saito. He just didn't reckon with one thing - Saito is a secret Ninja! So when Aiko takes a turn for the worse, the mild-mannered man during the day goes on a no-holds-barred Ninja revenge mission against the evil bastards that have ruined his life! Radical!

Sporting a fast pace, a high-quality look, top-notch action sequences (the boat scene is a standout), and great music, including the Pat Benatar-like theme song "Back to the Shadows" by Peggy Abernathy, Pray for Death doesn't disappoint. Director Gordon Hessler, a well-known drive-in guy, pulls all the correct elements together in just the right mix. He downplays the minor negatives, such as the fact that Sho's accent is so strong it's basically impossible to tell what he's saying, and accentuates the strengths, such as the Ninja-based action sequences and revenge plot. It truly is a recipe for success more directors would be wise to follow. 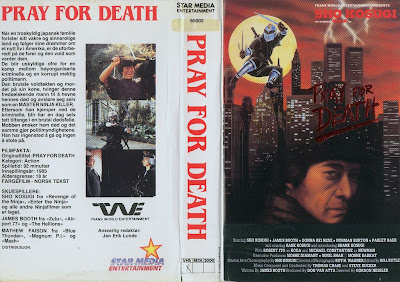 Of course, a great action movie needs a super-evil bad guy, and James Booth as Limehouse Willie fills the bill in spades. Yes, his name is silly, but that's just a distraction, as you will cheer for the moment when Sho exacts his revenge on one of the ultimate jerks in 80's filmdom. Add to that the elements of corrupt (and not-so-corrupt) cops involved in this gangster/ninja war, and the subplots of the temple setting where we learn why Akira knows what he knows.  In the good guy department, Parley Baer does a good job as the kindly, sympathetic Sam Green, while Kane and Shane do some pint-sized karate moves of their own (and they have the best bike since Pee Wee Herman). They also like to watch something called "The Black Ninja" on TV.

This is an actual NINJA MOVIE, unlike the trowel-jobs of Godfrey Ho. This is a coherent, good production. Featuring yet another excellent opening credit sequence featuring Sho, and produced by TransWorld entertainment (the big-box VHS was released on USA video, how appropriate to the storyline), please don't hesitate to check out this "Sho"-stopper.

I got killed when I reviewed this because I wasn't a big fan of it. The action was awesome, but I felt like they piled on our hero too much. I mean, either kill his wife off or don't, but to kidnap the son, hit the son and wife with a car, then kill the wife in the hospital... it was like the poor guy kept getting sent to kick the ball while Lucy held it.

On the other hand, the action and music were both great, and Kosugi held it down, so I'm willing to admit it was more me than the movie.

I generally agree with your assessment, but maybe you have to be in a certain frame of mind. Also Limehouse Willy was a killer bad guy and we were just waiting for him to get "Sho'ed" up!

Agree with DTVC completely on this. I found it kind of depressing, plus there was never a ninja to ninja finale. Still think Revenge of the Ninja is Sho's best, and tops in the genre.