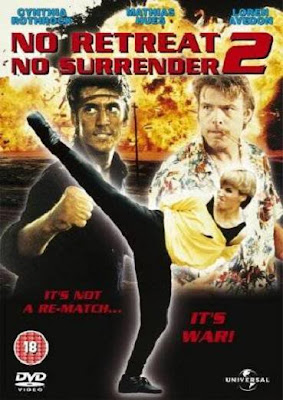 Scott Wylde (Avedon) is a young American kickboxer who comes to Bangkok to look for his friend Mac Jarvis (Thayer). During his quest, he meets the spunky Terry (Rothrock) in a boxing gym. After that, there is good news and bad news for Mr. Wylde: the good news is, while soaking up all the Bangkok nightlife, he finds his buddy Jarvis (in a club facing off against an opponent in wrist-wrasslin', naturally). The bad news is, his girlfriend Sulin (Patra Wanthivanond) is kidnapped. It seems her father is using his wealth to fund some anti-communist forces, so the commies kidnap her to use her as bait to get to him. But they didn't count on one thing: the 2-man and 1-woman army that is Wylde, Jarvis and Terry!

They must "climb Death Mountain" to infiltrate the commie training camp in Cambodia. But it's going to take all their wits, ingenuity and a whole lot of weaponry to combat the sadistic, M. Bison-like head of the camp, Yuri the Russian (Hues), a hulking brute who loves throwing his enemies in a pit of hungry alligators just for fun. Will our heroes triumph over those nasty commies and save the girl? 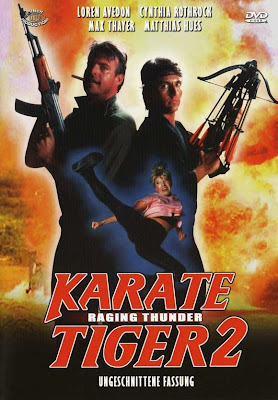 No Retreat No Surrender 2 is simple 80's fun that is easy to like. All the ingredients are present and accounted for: some Americans with nice camaraderie fight commies, highly entertaining fight scenes, weaponry and blow-ups, a super-evil bad guy, and horrid line readings by the actors. Even though none of our lead players are Asian, all the fight scenes clearly have that Hong Kong-style fast pace and inventiveness to them, thanks to director Yuen. Even though this was at the beginning of his directorial career, he appears confident, at least in the action department (which is all that matters, really). The final fight between Hues and Avedon is excellent and very well executed. 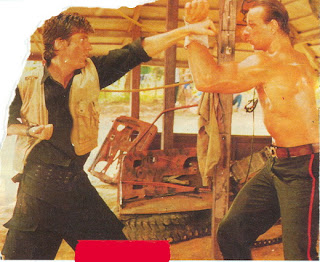 Avedon appears to be some sort of cross between Emilio Estevez, Ron Marchini and Wild and Crazy Kids' Donnie Jeffcoat. Sure, his acting is horrendous but that's not why Yuen hired him. The dude has some moves and is no slouch in the martial arts department. We always love seeing Cynthia Rothrock and here she's looking especially pixieish. She tends to deliver all the groaner one-liners in the film and provides a lot of the humor, on top of her martial arts skill. A short-haired, barely-recognizable Hues once again (even though this was his first film role) plays the baddie you love to hate. Max Thayer of No Dead Heroes (1986) fame plays the glue that holds all this madness together. He's the cigar-chomping leader that doesn't think twice about drinking snake blood and tying some beer cans to his machine guns to take down the baddies. 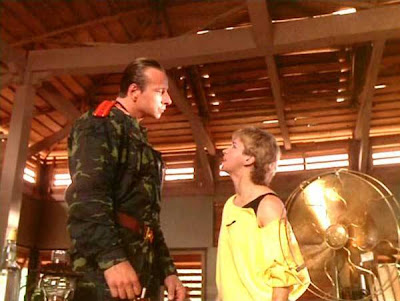 The stilted, awkward dialogue, if anything, helps the fun of the movie, and Matthias Hues is about as Russian in this movie as Richard Norton is German in Strategic Command (1997), but it all goes with the territory. NRNS2 is good thanks to the direction of Corey Yuen and a cast of familiar favorites delivering the goods.

This is one of my favorite Rothrock flicks, it's just a drag that she is sidelined by the backslapping male leads. She's not a great actress but she can definitely hold her own, and coupled with her fighting skill. Damn.

I definitely agree with you! When she has a good director\fighting choreographer, her fighting skill is amazing.

I personally like Above the Law best, but even Godfrey Ho's otherwise entertainingly terrible Undefeatable showcases Rothrock's profound talent.

I loved Hues as the baddie in this, and that end fight between him and Avedon was excellent. I agree about how great Rothrock was, it would have been nice if Yuen directed a film where she was the star.

That would be an amazing pair-up with Yuen and Rothrock. It could be like Angel Of Fury, but with more bone-crunching fights.