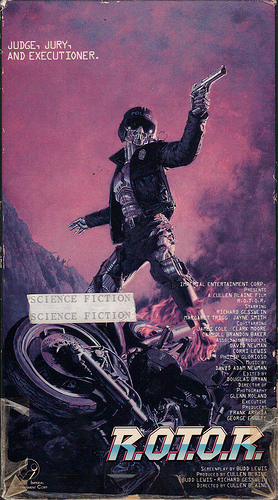 A lot has been written about R.O.T.O.R., and with good cause. We thought we would throw our hats into the R.O.T.O.R. ring with our own take.

In the grand tradition of acronym movies such as C.H.U.D. and C.H.O.M.P.S, but more accurately a regional take on Robocop (1987) and The Terminator (1984), ROTOR is mesmerizingly inept but provides fun for those in a forgiving, receptive mood. Starting with "Today's Headlines" written on the screen, in a sort of written take on the verbal version from Cobra (1986) (every five seconds, someone gets shot, etc.) we then learn the coveted secret of the ROTOR acronym: Robotic Officer Tactical Operation Research.  Apparently we are at some point in the future where crime is rampant. So naturally Dr. Coldyron (Gesswein) develops the ROTOR, a robotic police officer. In a very long scene, he argues with the official Earl Bugler (Michael Hunter) about the future of the ROTOR program. So, ROTOR isn't quite finished and is in storage for the time being. But the ultra-smooth janitor Shoeboogie accidentally unleashes it on the world. Now ROTOR is on the loose and chasing innocent civilians around. So now Coldyron must stop his own creation. So he teams up with muscular transsexual Dr. C.D. Steele (Smith) to chase it down before it causes too much havoc. Back at the base, Willard the Robot holds down the fort. Can they stop ROTOR?

Clearly the most obvious question that arises in the wake of viewing ROTOR (out of the many you will inevitably have) is...if ROTOR is a robot that is created by Coldyron, why does he have a mustache? Why would you BUILD a mustache on a robot? Secondly, why does he look so much like Tackleberry from the Police Academy series? I guess he really wanted to scare scofflaws.

Sure, the acting is laughably wooden, and Gesswein as Coldyron has zero charisma, and in actuality, here the people are more robotic than the robots. How ironic. Or should that be spelled ironyic ? The movie opens with Coldyron doing mundane daily activities like making breakfast. Luckily the viewers get to see how many raw carrots he has in his refrigerator. On his desk at work, he even has a little toy robot that looks like Wall-E. ROTOR himself should sue the Disney Corporation. As if the movie wasn't nonsensical enough, the filmmakers chose to give it a bizarre flashback structure with narration delivered flatter than a playing card. Most of the dialogue explains everything, yet nothing, if that makes any sense. ROTOR would have benefited hugely from a name star in the Coldyron role, that would have brought the interest level way up.

By far the best character in the film is Willard, a "happy birthday Paulie"-style robot who wears a hat, answers the phone (not seen) and is even sassy. He dances with Shoeboogie and even hits on chicks ("hey baby, hit me with your digits"). ROTOR is amateurish, disjointed, and at times painful to watch, but we mean this in the best way possible. The idea of a rogue robot could have been executed better, but you can't blame the low budget for the strange pacing and plot flaws. What you can blame it for - or should we say celebrate it for - is the scene where Coldyron is demonstrating his robot technology at a board meeting, and a Terminator/Geoff Peterson-like robot, with the magic of stop-motion KRUMPS! Yes, watch out Rize (2005), you haven't lived until you've seen a krumping robot. It is hilarious, and, like the Wall-E toy, ahead of its time. It will never get the credit it deserves I tell ya. 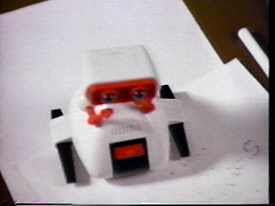 Sporting some killer box art that probably lured in quite a few suckers back in the video store days who assumed they were not going to get something this silly, and filmed in Texas, ROTOR has funny voice overdubbing, silly character names (Detective Mango?), and some Dan Rather-style pseudo-clever down-home sayings in the utterly ridiculous dialogue. It also predates fellow killer-cyborg-on-the-loose-dressed-in-leather movie American Cyborg: Steel Warrior (1993). But another question arises: who did the filmmakers think would truly care about such a wacky sci-fi action exercise? A film like this pleases neither hardcore fans nor is it appropriate for children, it's true proper audience. So it falls somewhere into silly no man's land. But it has some good music, especially the signature tune, the inexplicable ballad "Hideaway" by Randy & Smith.

This is a movie that should have been released by Troma or AIP, and you can tell the filmmakers put a lot of work and effort into their creation. The end product is laughable, both intentionally and unintentionally.

This is definitely one of those "what kind of movie watcher are you?" kind of films. If you're a person who loves the interactive experience of getting together with some pals and making fun of what you're watching, it doesn't get any better than this.

Also, as far as the moustache on the robot goes, I am so desensitized to lip-sweaters on my police officers, that I didn't give it a second thought. I have a friend who's a bodybuilder and used to rock a flat-top and 'stache, and people always assumed he was a cop. The 'stache gives the R.O.T.O.R. that added element of authenticity.

The cover art is awesome, indeed. I don't get it how all these cheap, bad flicks all had such great artwork, unlike today when 100+ million dollar features basically have a few faces pasted together on their promotional material.

You are right. This movie is so absurd it has to be seen to be believed with friends.

We just loved the double whammy of Willard The Robot line of "Hey baby, hit me with your digits" and the krumping robot we couldn't stop laughing!

Well that's that then. I have to buy this.

You will definitely enjoy the hilarious badness of it, Sutekh!

Great review Ty!
Honestly, I was so flabbergasted by what I saw because it was so much awfulness to take it all at once, that I totally forgot to mention Willard and that bodybuilder chick in my review.
In regards to that robot demo in the board meeting, I for the life of me could not tell if it was dancing or supposed to be doing karate moves. But my constant laughing probably did't help. lol.
Love the review man! Great one!

Sold! Great (and humorous) write-up. Now to see if it on netflix ...

Thanks! We saw it on Netflix Instant. Just checked and it expires on Oct. 15th. We are very interested in your take on it!

Guys, the chatting between Coldyron and Steel in the car is hilarious. Also the goof in the alarm clock at the begining travelling 10 minutes back in time. This movie is special.

We completely agree! They don't make them like this anymore. Willard The Robot and Coldyron are fascinating characters!

It's not available on dvd,but you can get it on dvd-r at www.revok.com..I'm proud to have it in my collection.

Cool! It is definitely worth owning for Willard The Robot alone.

It's a shame that they've taken this off of Netflix and also a shame they no longer have the party system but I digress. Regardless, this film is up there with Troll 2 in the way of cult status or at least it should be. Some friends of mine (for fun) riff films like R.o.t.o.R. and other great 80's cheez. If you've got 12 minutes check out our comp. https://www.youtube.com/watch?v=JSVCWXUa_zc

This should always be on Netflix for the world to see!

Will have to check that out! Thanks for the heads-up.