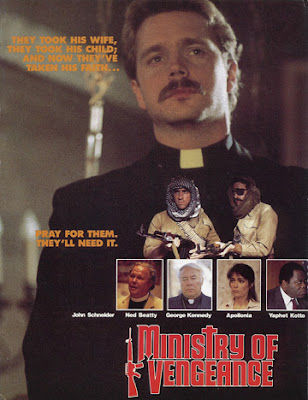 
John Schneider, of the legendary Cocaine Wars (1985), here plays David Miller, A Vietnam Vet that became a priest after he left the service. He has plenty of flashbacks about the horrors he saw in 'Nam and, naturally, he is a man of peace and nonviolence. At a Rome airport, a gang of super-evil terrorists open fire on the crowd. The leader of the terrorists is Ali Aboud (Miano). He personally kills Miller's wife Gail (Register) and his young son Kim (Joey Peters). This shakes Miller's faith, and, after consulting with his fellow priest and confidante, Rev. Hughes (Kennedy), he decides to take a break from Priest-ing and goes on an obsessive quest to find Aboud.

He reconnects with his old 'Nam buddy Col. Freeman (Tolkan), now a tough-as-nails drill sergeant. Freeman agrees to help Miller, but first puts him through his paces once again and re-trains him for combat. Now trained and teamed up, Miller discovers Aboud is hiding out in Lebanon, so the two men go there. There, Miller meets Rev. Bloor (Beatty), a kindly Priest in a little church, and Zarah (Apollonia). Now closer to exacting his revenge on Aboud and his men than ever before, will he be able to do it - or will a conspiracy that goes all the way to the top prevent it from happening? 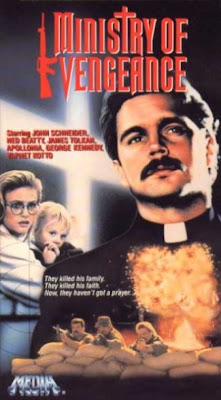 One of the best things about Ministry of Vengeance is the top-notch cast. Everyone here puts in a quality performance - First off, we forgot to mention Yaphet Kotto as the bureaucrat Whiteside - whose "special appearance" is a glorified cameo. His talent deserved more. Miano is scummy and evil as Aboud, Beatty is quirky as Bloor, Kennedy is dependable as the kindly priest, Tolkan seems to be having fun as the R. Lee Ermey-style army guy, and Schneider is once again great as Miller. Miller is having a crisis between faith and reality, which seems to be the main crux of the film. What happens in real life - murder, slaughter and terror - somehow seems overpowering and blots out Miller's peace-loving idealism, which is a nice thought but just isn't functional in the real world. Only one type of ministry is real - the Ministry of Vengeance! 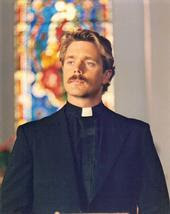 Now, while philosophically, the movie is on solid, interesting ground, and the cast of players is equally solid, the only problem here is that it can't really sustain its intensity over its entire running time. There really should have been a lot more hard-hitting vengeance in the final stages of the film, but the middle section drags, and it never truly recovered from that slack. 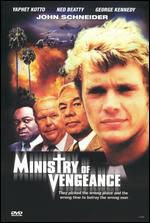 But Ministry of Vengeance is a quality, theatrically-released product. While everything seems in place, it could have used just a bit more edge for our tastes.