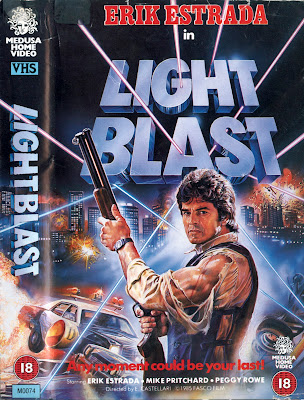 When evildoers with a fake news van and a giant super-laser threaten to blow up the city of San Francisco if their ransom of five million dollars (later upped to 20 million) is not given to them,  it's up to Inspector Ronn Warren (Estrada) and his partner Lt. Curtis (Michael Pritchard) to stop the nefarious, weight-lifting ex-college professor Dr. Yuri Soboda (Girolami). It's a race against time as Warren must put together the pieces - from a mysterious morgue to the final chase - before everyone in the city by the bay gets their faces melted off! Is he man enough...or is he just a "turkey"?

Light Blast is an incredibly fun, highly entertaining winner. From Estrada's killer entrance, to the super-laser, to the rough-and-tumble action sequences and everything on down. Estrada's never been better than here as the charismatic cop Warren, who wears a cool jacket, and like Last Man Standing's (1996) Kurt Bellmore, has a policy of only hijacking awesome high-powered cars for his chases. Pritchard is lovable as Curtis, and they have a nice camaraderie, as Warren also does with his wife Jacqueline (Rowe). It's "Light" years away from that disgrace to laser movies, No Time To Die (1984). Drench that in an awesome score by Guido and Maurizio De Angelis and the confident direction of the legendary Enzo G. Castellari, and you have a comic-book-style action piece with plenty of re-watchability value. 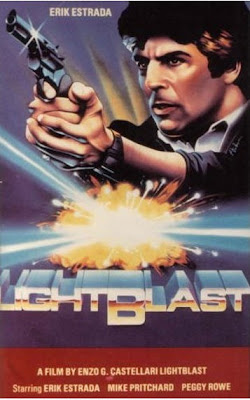 On top of being fast-paced, funny, violent, well-shot, and consistently good with no dull bits (no mean feat in itself), 80's fanatics will get a kick out of the clothes, cool watches, phones, cars, microfiche, hats, tape players, an early form of GPS, and, of course, the infamous laser with its great effects. You know Soboda is evil because of his scarf and mustache, and like any baddie worth his salt, he has a command center. Light Blast has plenty of mystery and intrigue, and, as if all that wasn't enough, there's even a rockin' revenge sub-plot. It'a a quality production that knows its audience and delivers the goods to it in enthusiastic spades. 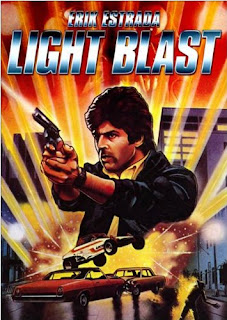 Light Blast truly has it all. If you're looking for an upbeat ride of a film to Blast you out of the movie-watching doldrums, this is just the ticket. It made us believe again.

Can't agree more! It is an awesome movie!

Lightblast is a nice big surprise Action entertainer. Enzo G. Castellari always delivers in the over the top well staged Action Dept. Nice to see Estrada in a good role. He actually did a few movies in Europe & they all came out pretty well.
Nice movie to pick up on & share guys, Thanks.

I had completely forgotten about this. I vaguely remember it, so I need to see it again. How do you not love Erik Estrada?

Paul Cooke: They make them like this anymore! This movie actually melts your face!

DTVC: Erik Estrada is a charming guy and this is one of his best roles!

Good action movie.
In Germany this film was released on the vestron label as Neon Killer

It is a very entertaining flick! That is a pretty cool alternate title for the movie.