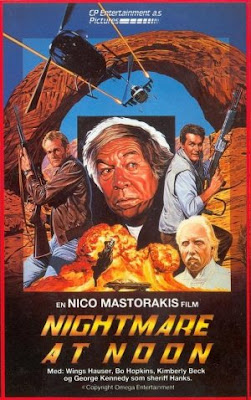 
When a mysterious man simply known as "The Albino" (James) decides the best place to try an experiment putting toxins in the water supply is the small town of Canyonland, Utah, all hell breaks loose. Normally-friendly citizens wig out, get extremely violent, and bleed green blood. All this is unbeknownst to entertainment lawyer Ken Griffiths (Wings) and his wife Cheri (Beck), who are traveling through the town in their RV. They stop to pick up the loner Reilly (Hopkins) and when they see the chaos in Canyonland, they decide to fight back. Aiding them is Sheriff Hanks (Kennedy). Will our heroes be able to put an end to the insanity? 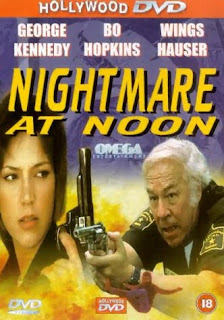 The first thing you'll notice about Nightmare at Noon is its killer cast. It's pretty much a B-movie dream come true. However, we weren't totally convinced that it was being used to its full potential. Wings' personality should have shone through more, Kennedy is barely involved, and there isn't a lot of meat to Hopkins' laconic tough-guy. Neal Wheeler as Charley, the first victim, is reminiscent of the notorious cover for the Super Nintendo game "Phalanx". Brion James says literally nothing, but is somewhat intriguing as the main villain (backed up by his goons labeled APE, or, the "Agency for the Protection of the Environment"). He mainly looks through binoculars for most of his screen time. If you've ever wanted to know what it would be like if Johnny or Edgar Winter created small-town zombies in a Western setting that spew Nickelodeon-style Gak, here you go. 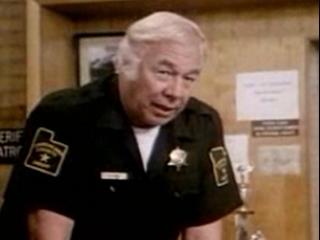 What director Mastorakis seemed to be aiming for is evident right in the title. "Nightmare" representing the horror aspect of the film, seemingly influenced by I Drink Your Blood (1970) and The Crazies (1973), as well as any number of zombie films, and "At Noon", representing the Western movie aspect. In fact, the characters even pass a movie marquee showing that High Noon (1952) is playing, and the final chase is taken from innumerable Western films. 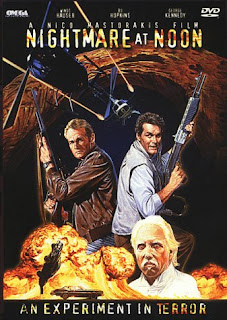 A hybrid of this type is a worthy idea, but honestly it needed more blood, gore and nudity to rise to the level of an exploitation classic. It does have plenty of action movie-style thrills such as car blow-ups, stunts and much shooting, but it's hard to say if it all exactly fits. A lot of the elements were there, but not all. It's clear here that the golden 80's were ending, and the less-edgy 90's was on the horizon.

I had this as a fun bad movie, but nothing really beyond that, for the reasons you mention. I liked Brion James as an albino, I liked the Bo Hopkins sheriff curve ball, and I noticed Wings Hauser had his mouth open most of the film, even when he wasn't speaking. And as always, love that you're keeping Wings fresh in my mind when I'm considering future reviews.

Definitely agree with you!

Happy to keep Wings fresh in your mind. We have a couple more Wings movies coming up.