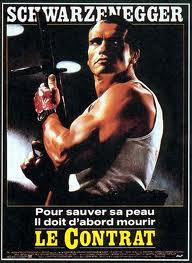 
"NO ONE GIVES HIM A RAW DEAL"


Today we thought we'd revisit an Arnie classic. Sometimes the hustle and bustle of reviewing movies from the direct-to-video world makes you forget that staple action movies such as this came to the theater, and they shouldn't be overlooked.

In this Arnold outing, he plays Mark Kominsky, the sheriff of a small town who always gets his man. He was once an FBI big shot, but was "exiled" to the boondocks. When his former FBI chief Harry Shannon (McGavin) informs him he might have a chance to get back to the Bureau, Harry pays attention. It seems a group of mobsters led by the evil Patrovina (Wanamaker) killed Shannon's son, so he does what any grieving father would naturally do: he gets Arnold Schwarzenegger to go undercover in the organization and get an explosive revenge. And if anyone screams "I fit in perfectly with Italian gangsters" it's clearly the Aryan supergod Schwarzenegger with his thick Austrian accent. It's no wonder Shannon tapped him for the job. (In his defense, he did dye his hair black, so, disguise completed). 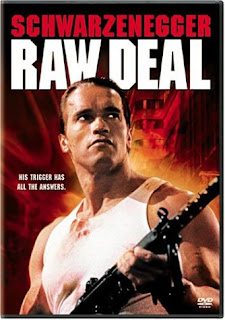 While taking down the "strongest of the Chicago families", Kominsky runs into a variety of colorful characters. Baxter (Regalbuto) is the federal prosecutor with mysterious motives, Rocca (Paul Shenar) is the "undertaker" for the mob, Lamanski (Hill), not to be confused with "Kominsky" is a mobster honcho, and it's interesting to see "Adam Schiff" in a totally different type of role than his legendary Law and Order character. While away from his wife (Blanche Baker), Kominsky meets a totally different type of woman, Monique (Harrold), a flashy dame, also with questionable motives. Ed Lauter plays the cop one step behind Kominsky, and last but not least is Comeuppance favorite Robert Davi as Max Keller, a mob enforcer suspicious of Kominsky. I guess Kominsky's "undercover name" of "Joe Brenner" didn't convince him like it did everyone else. 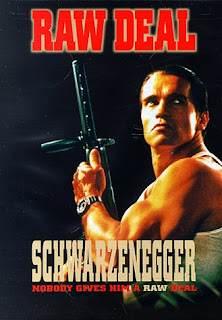 But honestly the star attraction here is unquestionably Schwarzenegger, who when we first meet him is wearing a red and black lumberjack shirt and closely resembles the Brawny paper towel man. He quickly and effortlessly charms the audience with his winning smile (even while chomping a cigar), and also with his classic one-liners like "you should not drink and bake" and "magic? Or...magnet?!!??!!" His deadpan wit makes you see what the writers of The Simpsons must have seen with their "McBain" parodies. There's an immense amount of shooting, but it's all good clean fun, really. 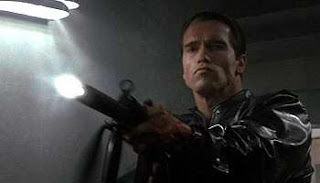 And, as opposed to some of its imitators, Raw Deal has impressive widescreen photography and a cool score. Some of the pop songs it uses are interesting too, such as The Rolling Stones' "Satisfaction", which must have cost the filmmakers a pretty penny to use, as well as lesser-known gems like Pamela Stanley's "If Looks Could Kill". Add some humor into the mix, and it all adds up to classic 80's entertainment.

As you probably already know, Raw Deal is foundational for your knowledge of American action films and is a true classic of the genre. If you haven't seen it yet, don't hesitate.

Comeuppance Review by: Brett and Ty
Posted by Ty at 8.1.11

A downright classic of the genre, and a misunderstood second-tier actioner along side Cobra. Still, when it comes to Arnie flicks my favourites are Predator, Running Man and Red Head - Arnie as a cold war Russian cop with Jim Belushi? Brilliant.

It goes without saying how fantastic this is. It's currently on Netflix's Watch Instantly, along with another classic, Commando. These films can't be watched enough. Great review.

Sutekh: Definitely agree with you! All the Arnie flicks you mentioned are excellent. Also I love Cobra! and Red Heat is very underrated.

DTVC: Thanks! Commando is a classic! "Let off some steam, Bennett!"

I admit 'Raw Deal' is not really my favorite of Arnie's flicks. It has good entertainment value, and some hilarious one-liners, but something is just missing for me to love it like I do, for example, 'Commando', 'Predator' and the others.

Also, Ty, have you ever heard of a band called 'ArnoCorps'? They play a genre they themselves refer to as action-adventure hardcore rock and roll. Every song of theirs is, as you may have guessed it, inspired by one of Arnie's films - in fact, the lyrics are made of Arnie's film lines.

Here's a few songs if you want to give them a listen, you may find them enjoyable:

I have the CD, and it's really awesome!

Those songs were really cool! Thanks for the links. Another great Arnie related rock band is Austrian Death Machine.

Their song "Get To The Choppa" is catchy and very metal!

Great review, I love Raw Deal. Other than Commando, this might be my favorite non-sci-fi Arnold picture.

The scene of Arnie driving a truck through the casino is forever etched in my mind's eye.

Raw Deal is Arnie at his best. I also love that part when he smashes through the casino!