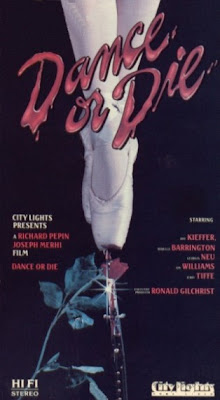 If you are lucky enough to find a copy of Dance or Die, and you read the first sentence on the back of the VHS box, you will see this (and I quote): "Jason Chandler wants just two things in life: to stay off drugs, and to choreograph a dance show that rivals Flashdance." If that doesn't make you want to immediately see the film, there is clearly something wrong with you.


The aforementioned Chandler (Kieffer) is a skinny, whiny, effeminate bean pole of a man who is putting his dance troupe through its paces - literally. He lives in Las Vegas and loves to just cruise around aimlessly (a pretty significant portion of the film's running time). He shares an apartment with his buddy Alan, who is a cocaine dealer.

This presents a problem for Jason as he is a recovering addict. They're the original odd couple! Why a sitcom spinoff of Dance or Die never materialized, I don't know. One day while Jason is out spandex-ing it up with his troupe, some baddies come in and shoot up his apartment, killing everyone at a backyard barbecue. They even destroyed the inexplicable outdoor fish tank in the middle of the lawn. Realizing they missed Jason in their killing spree, now they are after him. They think he has the coke, or some information, or something. Also the main evil bad guy is named "Turtle".


Another big part of Jason's day is going to his NA meetings. His sponsor is a woman named Kay, and she and Jason have a very, let's just say, dramatic relationship. Jason also has a romantic relationship with Diane (Barrington), but what is she hiding, if anything? Plus Jason is plagued with nightmares about all his troubles - dancing, drugs, the women in his life, the gangsters that are after him, dancing, etc. So he calls in a psychic who looks exactly like Francis Ford Coppola to help sort out his problems in life. Will Jason Chandler be able to jazz hands and spirit fingers his way out of this one?


We originally tracked down this movie because it was directed by Richard Munchkin, of Ring of Fire (1991), Fists of Iron (1995) and Deadly Bet (1992) fame, and it was released by City Lights, the pre-PM company of Pepin and Merhi. Also we try to watch 80's dance movies whenever possible. So this seemed like a winner all around, and we turned out to be right. The absurd outfits, funny music (that plays at ALL times throughout the movie) and wacky dream sequences are worth the money alone.


Yes, there is some choppy editing, it has a cheap video look, and some of the non-acting is not especially convincing, but come on. It was Munchkin's first film. Cut the guy a break. Besides, the movie's highly-entertaining strengths far, far outweigh some minor technical drawbacks.

Speaking of which, why Munchkin chose "Roy Kieffer" to be the main hero is puzzling. He's not likable, we know nothing about him (or Jason Chandler, heh heh), in the film he says he's 26 years old but he looks 46, and about halfway through the film, it's like he snaps and just screams and yells at everybody. It seems like he's trying to emulate James Woods, but he's so wimpy it falls painfully short. As if to prove this "fierce and fabulous" dance instructor is totally hetero, for some unknown reason, Rebecca Barrington shows up as his "girlfriend". There's even an utterly unnecessary and unconvincing (I wonder why...?) sex scene between them. Listen, we couldn't care less if he's gay. But that the movie tried so hard to convince us otherwise, for no reason at all, is absolutely hilarious.


As scenes of dancing and dying are intercut in various scenes throughout the film, perhaps Munchkin was trying to give the audience a lesson in the dichotomy of life and death. Sorry that was so pretentious, but the movie does live up to its title. As this great movie ends with Jason Chandler playing some video poker and running into an Eskimo on the streets of Vegas that makes him question the direction of his life, Dance or Die can only be described as an existential film. You will be talking about the "open ending" for weeks to come.

Featuring a notable title song by Pattie Kelly, we heartily recommend Dance or Die.
Comeuppance Review by: Brett and Ty

This is off-topic, but I just wanted to wish you all the best in 2011 (and many more explosive action reviews!).

Thanks Ventilation Shaft! Have a good new year too! Looking forward to what you'll review in 2011!

This movie looks hilarious. 80s dance movies can be really entertaining. And ditto on the New Year wishes.

Happy New Year too DTVC! Dance Or Die is City Lights comedy gold. I hope you can see it!

Black Swan is a shot by shot remake of Dance or Die.

Haha. So true Anto! Dance Or Die was robbed of every Academy Award in 1987. Natalie Portman totally ripped off the performance of Roy Kieffer.