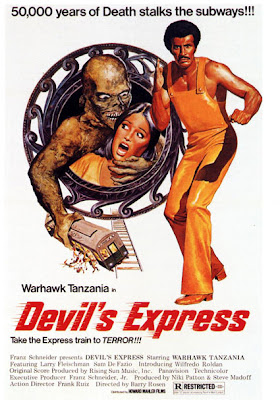 AKA: Death Express and Devil's Express

Gang Wars is a unique movie everybody should see.

The man with one of the most awesome names in human history, Warhawk Tanzania, stars as New York City Kung-Fu instructor Luke Curtis. He and his none-too-bright compatriot/student Roldan (Roldan) travel to "China" to brush up on their martial arts. While there, they just happen to stumble into a mysterious hole where, in 200 B.C., some monks buried a secret medallion. Despite Luke's admonition that "this place has strange vibes!", Roldan sees the medallion and decides it's just the ice he needs to bling-bling up his fly threads (hey, I'm just trying to keep up with the movie's lingo), and he takes it.

Unfortunately, this angers the medallion's owner, an ancient zombie with orange skin and ping-pong ball-like eyes. The zombie gets on a boat and follows them back to New York, and while he's there, causes all sorts of havoc in the subway. Meanwhile, due to that crazy Roldan and some mix-ups of murdered people involving the zombie, two street gangs, the Blackjacks and the Red Dragons, are at war. Can two cops on the beat stop the madness, or will Warhawk have to don his bright yellow overalls and take matters into his own hands? 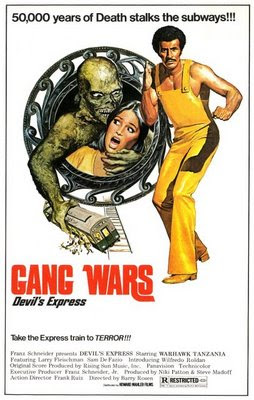 What's great about Gang Wars is it truly is down-and-dirty, street-level, even guerrilla filmmaking of the New York City 70's, whose sole intention was to play some grindhouses. All the kung-fu fights are actually outdoors in the streets and alleys of the city. Yes, the filmmakers' hold on the technical aspects of filmmaking is...shaky at best, but for pure entertainment, it's hard to beat a hybrid blaxploitation/kung-fu/zombie horror film, and even if it doesn't ALWAYS gel, which is normal, the film certainly gets an A for effort.

Warhawk Tanzania is like a cross between Commodores-era Lionel Richie and Jim Kelly. Roldan is his John Leguizamo-like sidekick, who, though he's constantly referring to Curtis as "Sifu", it sounds like he's calling him "seafood", but that just naturally fits in with all the other 70's jive dialogue. Not to mention the great clothing, cars and NYC locations of the time - it's an excellent time capsule, and the icing on the cake is the super-funky and catchy soundtrack by famed musician/producer Patrick Adams.

Naturally, even though the zombie is an unimaginably ancient, gooey monster with eyes like those protectors people wear when they go tanning, somehow he is wearing a contemporary suit and tie. Those prehistoric demons sure were fashion-forward. The zombie also shrieks like a banshee and the whole "horror from underground" thing predates C.H.U.D. (1984) by 8 years. You might even say the kung-fu zombie is the original C.H.U.D. Where else will you read a sentence like that last one?

It's gritty, silly, fun and very entertaining. The screenplay was written by five people - presumably each person was assigned a different genre then they mashed it all together. Warhawk Tanzania is a man of the people - see him in action as soon as you can.

This film sounds almost too good to be true! I actually appreciate it more when filmmakers try these types of genre hybrids and fail spectacularly than when they approach a single genre with a "paint by numbers" approach.

While I've never heard of this one previously, it sounds similar in tone and execution to a 1982 movie called Raw Force (aka Kung Fu Cannibals.) It combines elements of horror, martial-arts, zombie film, sexploitation, and Love Boat style cruise ship antics with some of the most technically inept scenes around. Even has your boy Cameron Mitchell in it!

Great review, I'll keep my eye out for this one.

It is a classic genre mash up. Warhawk Tanzania should have been as popular as Jim Kelly!

Always wanted to see Raw Force! Cannibals and Cam Mitchell in one movie? it can't get any more perfect!

I saw this a long time ago, but only vaguely remember it. Seeing your review now, though, makes me think if the film were made today, it would star the Wayans Brothers and be shot in 3-D. I shudder to think of that. Anyway, great review, and great blast from the past!

Thanks DTVC! Also haha, That would be a pretty horrible 3-D remake! No one can replace Warhawk!

Had an eye out for this one for a little while. Great write up & cool to bring to peoples attention.
Now, Raw Force is an Absolute Must. Get this as soon as humanly possible !.

Thanks Paul! Also we are working on getting Raw Force real soon!

We definitely have a feeling you will enjoy the craziness of this movie!