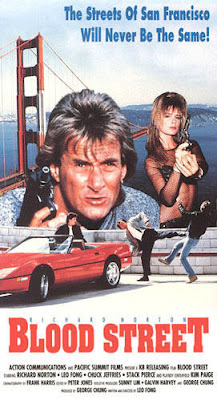 Starting, inexplicably, with a Star Wars-style crawl of text going up the screen informing us of the ever-important back story (and where "San Francisco" is misspelled), we are then re-introduced to P.I. extraordinaire Joe Wong (Fong), last seen in Low Blow (1986). The trouble begins when Vanna MacDonald (Paige) walks into Wong's office and asks him to find her missing husband. Thus, Wong begins an odyssey into the criminal underworld to find Aldo MacDonald, the gangster with the funny bug-eyes. The father-son team of Solomon (Pierce) and Bones (Jeffreys) work as Aldo's muscle, and lest we forget Malcolm Boyd (Norton) a kickboxer/gangster who stages illegal cage fighting matches in his living room. Teaming up once again with Woody Farmer (the guy who played "Fuzzy" in Low Blow) and his accountant (or perhaps his lawyer) Mark, can Wong avoid an oncoming gang war, dirty cops, many bullets, and a rock-bottom budget in order to get to the truth?

Leo Fong is back! He's got a new car, a new hat, and a new attitude. Also, the hat may contain magical properties.

In this lesser-seen sequel to the aforementioned Low Blow, Leo Fong, who starred in, wrote, and directed the film, gets to indulge all his Sam Spade-like film noir fantasies, putting himself in the driver's seat alongside some of his buddies like Stack Pierce (and Director of Photography Frank Harris, but surprisingly no Cam Mitchell), drowning it all in a moody sax soundtrack. One character even calls him "a cross between Bruce Lee, Philip Marlowe and a Catholic priest". I guess that's the beauty of writing a starring role for yourself. His flat delivery and brutal martial arts moves remain unchanged, and this time it's topped off with a voice-over by Fong himself, containing many groan-inducing single-entendres. But at least you can hear and see everything this time around, despite the bad video quality and junky overall feel.

One of the villains' names is Aldo MacDonald, but it sounds like Fong is calling him "Old MacDonald". Many other characters have funny voices, and Chuck Jeffreys MUST be related in some way to Eddie Murphy. Fong has really ramped up the brutality this time around, and, because it is Fong, sadism has never been so funny. Blood Street is also fairly nonsensical: right in the middle of Joe Wong's journey, we see a title card that says "Four Years Earlier" and we go back in time to basically another plot where he's chasing down this dude in Mexico. Add to that the fact that the plot has more twists and turns than Lombard street in Fong's beloved San Francisco, and you have another mind-bending (or perhaps numbing) Fongtabulous experience.

The S.F. locations are a highlight of the film, and another great facet of Blood Street is that it is filled with dialogue and racial slurs you would never hear today. Fong is the most lovable wooden thing since the Nutcracker and you can't help but admire the guy and his work, defying the rules of budgets, acting, technical ability and even filmmaking itself to produce a highly entertaining product strictly meant to delight his fans. And it works.

Released on VHS in the U.S. on the small KB Releasing label (does anyone out there know anything about them?), the running time stated on the box is 88 minutes, but in fact is is a brief 79.

Two Leo Fong reviews in five days? You guys should be careful that you don't overdose on wooden line delivery and technically inept filmmaking.

I'm still shocked (w/ mouth agape) that Fong, Richard Norton, and Chuck Jeffreys appeared in the same film, and even more impressed that you guys were able to track it down. It's a shame this isn't on any of those wonderful bargain bin ten-pack DVD collections b/c it looks like a gem.

Wow! I had no idea there was a sequel to Low Blow. And with Richard Norton! Fan-fucken-tastic!

Karl: Haha. We almost did! This is our last Fong flick for a little while. We have to buy more of his movies. This was tough to track down, but then we stumbled upon it in a used VHS store. It really should be on those dvd collections!

Sutekh: We couldn't believe it either! It was hilariously junky. Richard Norton briefly does his martial arts though. It is more Fong trying be like Philip Marlowe.

I still can't track this down anywhere!

There used to be a used VHS copy on Amazon, but it was somewhat expensive.

Hopefully you will find it one of these days! Gotta love Fong!

Tracked this down recently on local VHS, can't wait to watch it!

You were lucky to find a copy. Let us know what you think.

Good review for the film and your take was very fair. Yes, designed to delight Fong fans for sure!

This film was released in Australia on VHS. One video rental store in Melbourne, Victoria had a couple of copies in late 90s. I have a U.S. NTSC copy. Great film!

Now we know that there are some people out there who always want to find fault with B grade films, but many are highly watchable. I suspect many of these people who try their best to find fault while overlooking the merits are the same type of people who believe the official version of things, and whatever mainstream media tells them. One review on YT confirms that!

Fong is a great martial artist and for his age he did very well in that film. Stack Pierce was there and so was Woody Farmer. Cinematographer / director Frank Harris who I believe made a brief appearance or two in [i]LowBLOW[/i] was behind the camera for this one. He passed away in April 2020 I believe. (RIP) His wife, Diane Stevenett, secretary in [i]LowBLOW[/i] and as Candy in [i]Killpoint[/i] doesn't appear. Neither does the amazing Cameron Mitchell. But, the outstanding Stack Pierce is in this film and it's worth it just for that. Actually, it's worth it for Fong. Stan Wertlieb and Richard Norton are a bonus. As wooden as he may be, and part of the "Wooden Actors Club" which includes Peter Graves and Keanu Reeves, Fong's humor helps to make this film a gem. The action is great and he dialogue too.

This film needs to be on blu-ray and dvd.

Thanks for your comment! Interesting info about the Australian release, which we didn't know anything about. A lot of movies like this get a bad rap, but people need to have more fun when they watch films such as this.

Totally agree it needs to be on Bluray.