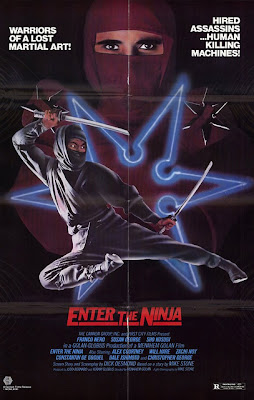 Cole (Nero) is a macho, mustachioed man who trains at a ninja school to master the art of Ninjitsu. Upon completing his studies, his rival, Hasegawa (Kosugi), presumably because Cole is a white Westerner, screams “He is not a ninja!” and storms off. Undaunted, Cole travels to the Philippines to visit his old army buddy  Frank (Courtney) and his wife Mary Ann (George). They have a lot of property there and they while away the hours enjoying cockfights with their poor laborers.

As it turns out, the sinister, “Mr. Big”-type villain, Mr. Venarius (Christopher George, no relation to Susan) wants their land. His henchmen, Mr. Parker (Gregory) and the memorable Siegfried “The Hook” Schultz (Noy) are ineffectual in securing Frank’s property for their own evil ends, so Venarius commands an army of white-suited baddies to take it. But they didn’t count on one thing: Cole and his newly-minted Ninjitsu skills! Additionally, Cole’s old nemesis Hasegawa is on the loose and Cole must deal with that. Will the power of Ninjitsu prevail for the good guys? 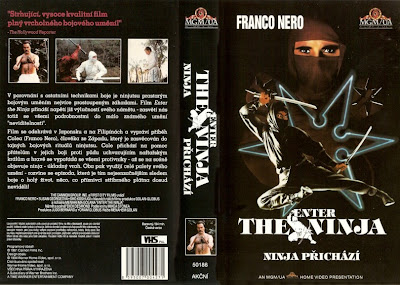 Not only did Cannon films and Sho Kosugi lead the pack during the ninja boom of the 80’s, they actually kicked it off with this, their first “ninja” film back in ‘81. Let’s remember that besides the Sho movies, Cannon also gave us the American Ninja titles as well as movies such as Ninja III: The Domination (1984). Smartly, the main hero role is played by a man who was an established star, at least in many territories around the world: Franco Nero. It may seem weird that Sho has a secondary role as Cole’s rival ninja, especially when most of the film’s running time is devoted to “Nero-Fu”, but this was a proving ground for Kosugi, who after this ruled the ninja film world. 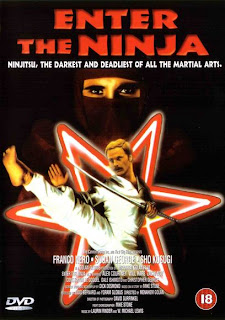 However, the opening titles sequence does have Sho, well, “showing” off his array of ninja moves and weaponry (a la Revenge Of The Ninja). Unfortunately, there’s no opening or closing credits song. The beginning and end of the movie deliver the ninja goods, but it’s what’s in the middle that lags. Yes, there is a lot of cool and bloody ninja violence, but the audience is not emotionally invested in the Cole character as portrayed by the dubbed-by-someone-else Nero. (Also I should mention that the “bad” ninja, Hasegawa wears a black outfit, the white guy, Cole, wears a white outfit, and there are some red ninjas as well. Could this be ninja profiling?) The characters of Dollars (Hare) and the aforementioned hook-handed Siegfried add color to the proceedings, and Christopher George camps it up as an over the top baddie, but the movie is just too long at 104 minutes. 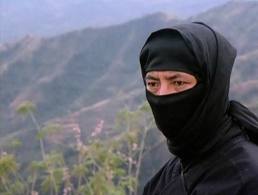 While Enter The Ninja is classified rightly as one of the premier ninja movies, its slow pace is a hindrance and most of the film is a run-of-the-mill actioner - one that should have been trimmed down to at least 90 minutes. It has silly, Scooby-Doo-like musical stings, and despite the presence of people like Susan George, who we always love seeing, it’s hard to become invested. However, it is very well-shot and the Philippines locations look beautiful.

Like certain TV shows when you compare the first season to later seasons when the show hits its stride, such as The Simpsons or South Park, this pioneering Ninja Boom entry is not a bad film, but, for the ninja film fanatic, the best was yet to come...

Yeah, this one missed the mark for me as well, though I loved Nero. Django is one of Nero's you should see if you haven't already. Great Spaghetti Western.

I agree. Wished Enter The Ninja was better! but really enjoyed Django! Nero made a lot of cool spaghetti westerns!