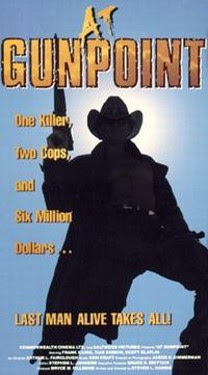 Casey Spencer (Bodkin) is a hardened criminal, a man who just spent six years behind bars. He’s a robber and murderer, but now he’s getting out for good behavior. After inexplicably waving a friendly goodbye to the warden, he hits the streets. He then heads out into the woods of Salt Lake City to find a multi-million dollar cache of...well, cash. But this fanny-packed loser has a problem: FBI agent Marty Steiner (Kanig). He has a long history with Casey and was the man that put him in prison. Naturally, Casey hates Marty. Marty, being a city boy, must travel into the wilderness to find and recapture Casey, with the help of young local guide Chuck (Claflin). Who will succeed, criminal or law enforcement? Who will get the money? Just try and hold your interest!

Although this is an AIP pickup, you can see why they picked it up. It has all the classic AIP stupidity you’ve come to know and enjoy. However, At Gunpoint at least gets points for trying. It’s a low budget, independent affair with an attempt at seriousness. It’s probably hard to make a movie like this and we understand that, and we applaud the efforts of everyone involved. However worthy the attempt was, there are still some major problems.

The movie lacks a charismatic or even remotely interesting villain OR hero. That’s a huge strike right there, but when you add the fact that there’s a lot of yakety-yak and a surprising lack of action scenes, that deals the death blow to this film. You’d think the filmmakers would have thought of these things, as they are so basic, but no. That’s what makes this film so frustrating: the attempt at quality is so earnest, but the results are so lackluster.

Frank Kanig as the mustachioed hero doesn’t inspire a lot of confidence, and Bodkin as Casey looks like a goofier James Caan. Claflin’s role could have been played by Corey Haim (or Feldman for that matter). That they couldn’t get even one minor name to be in the movie is probably what doomed this film to obscurity. It’s mainly a Western-inspired wilderness tale, with the FBI guy out in the woods with the local cops trying to catch the bad guys. It’s nothing you haven’t seen before, or anything that hasn’t been done since the 1940’s or earlier.

While we actually thought this movie would be a lot worse before viewing it than it actually is, it really is pretty dull and boring. If you’ve seen Driven to Kill (1991), you’ll note some similarities. It was shot in Troy Canyon, Nevada and Salt Lake City. If you ever see this movie anywhere, pick it up solely based on its rarity, but don’t expect much. Don’t go out of your way searching for it on the internet, it’s not worth that much trouble to put in your collection unless you are an AIP completist.

Great review, pity about the movie.

Thanks, Ricky! The movie could have been way better! But it was very junky and it had minimal action.

I'll remember to stay away from this one. I think we're learning the harsh reality about AIP through the films you've looked at so far: often so bad it's good is really just so bad.

So true! We have only one good AIP flick: Deadly Prey. Everything else is a tough sit.