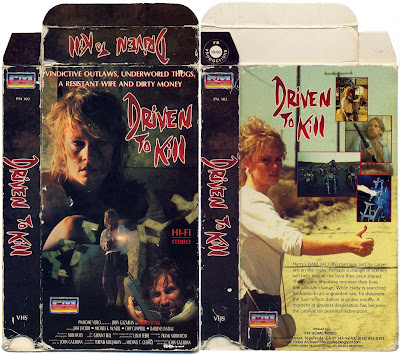 A Big Thank you to The Goodkind of Lost Video Archive for lending us the cover art! Here is an link to his review.

JB (Campbell) is the boss of a drug-running motorcycle gang. After a shootout with the Mafia, they steal four million dollars in drug money and are now on the run in the California/Nevada desert. Meanwhile, Harry (Jacobs) and Vivian (McNeill) are a couple whose marriage is on the rocks. In an attempt to save their relationship, they pack up their station wagon and head to Reno, Nevada. One night, Harry comes across JB’s gang and takes the money. Now the mob is after the motorcycle gang, and the motorcycle gang is after Harry and Vivian. After a lot of mindless shooting, it all comes to a head at an abandoned factory in the extreme heat of the desert. Who will end up with the money?

JB’s crew is certainly a gang of goofs and JB himself looks a lot like Yakov Smirnoff. But he has a lot of great yells. Whose voice it actually is remains open to debate. In fact, the majority of his dialogue is yelling at people and telling them to shut up. Most of the dialogue in the movie is pretty inane. The Harry and Vivian section of the plot is at least an attempt to build some sort of character, which is unusual for this sort of movie. That was appreciated, but Harry is just so annoying you don’t really care anyway. Their constant bickering is irritating and doesn’t exactly make you root for them. One of the main problems with Driven to Kill is that there are no likable characters, with the possible exception of Vivian. The movie needed a strong central character the audience can get behind. And Harry certainly isn’t it. He seems like a reject from Frasier.

Unfortunately, a lot of elements of Driven to Kill are just amateurish. There’s the acting, of course, but the direction and editing needed to be faster paced. The movie just kind of plods along, and at about 105 minutes, is overlong to boot. The fact that the movie is too long enhances the dumbness of it all. You can’t have a movie of that length with nothing to justify it.

On the bright side, we were introduced to such stars as “Jake Jacobs” and “Chip Campbell”. If those names don’t draw you in, nothing will. Interestingly, and perhaps sadly, we now know two low-budget action movie-based Chips: Mayer and Campbell. They should really team up. Write in today for what their movie or potential sitcom could be called.

Featuring the fascinatingly-titled, Kansas-like, should-have-been-a-classic song “Lady in the Night (Lady of the Night)” by Jake Hill, Driven to Kill is what happens when you mix Who’s Afraid of Virginia Woolf? (1966) into the DTV crime/shootout scenario. The attempt was worthy, but its success is highly debatable.

Yeaaaahhhh! A classic to be sure!

Venom: Saw the Seagal one a few years ago, it wasn't that bad. Might review one of these days.

The Goodkind: Haha, totally agree, this is classic Chip Campbell!

Yeah, once the amateurish starts I'm out. haha

Haha, definitely agree with you copyboy! It is really easy to stop caring about the movie.

I'm watching "Who Killed the Electric Car?" right now. Weird relation between that title and the title of this post.

Hmm, that is very odd! Who Killed The Electric Car was a very interesting documentary. Thanks for your comment.

Mad props for mentioning Yakov Smirnoff, Frasier, and Virginia Woolf in an action article. That takes skill. Now, I wonder if that Lady in the Night/Lady of the Night song is on itunes ...

Dr. Algernon: Thanks! That would be awesome if the song was on there. Same with all the great songs from Cyclone!

Hoaks2: It definitely is. With just a little more professionalism, this could have been decent.

I'll probably pass on this one based on your review, and that 105 minute running time. There is no low0budget action story important enough that can't be told in 88 minutes.

Totally agree. This is a dud. If it was a tight 80 minutes, this could have been decent.