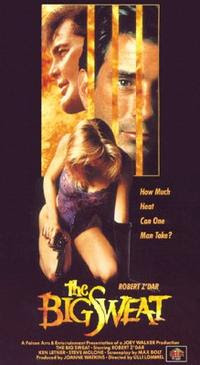 When Marco Donnelly (Molone) gets out of prison after five or six years (depending on who you ask), he goes back to his adopted mother’s ranch in rural California. Seemingly bored after a half-hearted attempt to “go straight”, he falls in with his old bank robbing gang. The gang thinks it can rob another bank and get away scot-free, but they didn’t count on one thing: the wildly awesome FBI agent Troudou (Z’Dar). Troudou has an upbeat personality, a cigar he never lights, a closet full of Hawaiian shirts, and a dream: to bring in Marco, the evil Joe Rinks (Sherayko), and the rest of the gang - on his own terms. However, this may require a bit of driving...

There are a few noteworthy things about The Big Sweat, but the most obvious is the extended, ridiculously long chase scene. Some sources have it at forty five minutes. Think about that. That’s insane. The filmmakers were misguided if they thought they could outdo classic chase scenes in movies such as The French Connection (1971) and Bullitt (1968) simply by lengthening theirs. That’s misguided - their logic must have been “more running time = better”. Unfortunately, this childish logic was not successful. Seeing as most chases only work if you care about the characters in the cars, The Big Sweat should have concentrated on character development instead. As it is, how much patience/caring should we have? It’s really asking a lot of the audience to endure, and even die-hard car chase movie fans would be hard-pressed to justify that.

Also noteworthy is the presence of the great Robert Z’Dar as Troudou. He gives one of his most animated, and some may say goofy performances that we’ve ever seen. His energy is absolutely crucial to enduring this movie. Without Z’Dar, this would have been a slog of the lowest order. From his killer entrance on down, Z’Dar rules the movie. Maybe he felt he had nothing to lose.  And once he’s teamed up with American Hero Barsky (Rushing), the sparks really fly.

Director Ulli Lommel is pretty well-known, and if you can imagine what an AIP Lommel movie might be like...well...this is it.

Most of the budget must have gone to Robert Z’Dar and gasoline in this brainless outing.

Director Ulli Lomell is pretty well known....for crappy movies. I haven't seen a good one yet.

That is so true! I hear his Green River Killer\other serial killer movies are awful.

The Z'Dar factor alone makes this one sound like a winner. I'll have to check it out.

Without Z'Dar, the movie would be a total slog. He saved the movie.

So true! Z'Dar is one of the greats.

There's something you should know: That 40-minute car chase was taken right from the 1974 movie "Gone in 60 Seconds".

Hmm, didn't know that. Thanks for the info! If they didn't steal that scene, the movie would be 30 minutes. Haha.

It wasn't the only time Ulli Lommel did that, too. He directed the AIP film "Cold Heat" in 1989, which stole chase scenes from Iron Eagle (1986) and The Junkman (1982). The Junkman was made by the same guy as Gone in 60 Seconds: H.B. Halicki. Just thought I'd point that out.

Appreciate that. Ulli Lommel should film his own stunts and stop stealing footage from the classics.