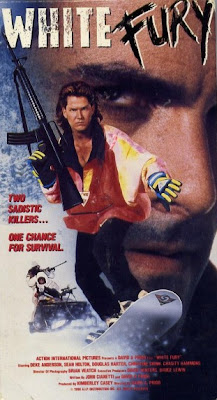 Danny (Holton) is a champion snowboarder who loves nothing more than being a radically awesome dude with an attitude. His idea of a perfect life would undoubtedly be jumping out of a helicopter on his snowboard and “slamming” a can of Mountain Dew. He takes his girlfriend Christine (Shinn) and his pals Greg (Berg) and Lesley (Hammons) to a remote cabin in snowy Colorado.  They think they’re going to get some nice rest and relaxation, but something goes awry...

Tyler Bennett (Anderson) and his accomplice Marcus (Kaskel) are amoral bank robbers on the run. To escape from the heat of their latest job, they head out to the country and somehow find the aforementioned cabin. They hole up there and generally terrorize the four young adults. But they didn’t count on one thing: a “bounty hunter outta Detroit” named Martin Towers. This grizzled, bearded man is relentless and has been tracking Tyler for years. Armed with a missile launcher and his own determination, will Towers finally get his man...?

This one was pretty junky, even by AIP standards. It’s a fairly basic hostage drama, married with some shreddin’ snowboards. The main problem with White Fury is that its very simple idea overstays its welcome. Due to its pacing issues, when it seems the movie is going to end, it just keeps going with no new ideas to sustain it. Its threadbare plot is running on fumes. And having a wildly overlong snowmobile/snowboard chase/gunfight - which could have been a lot cooler had it been handled differently - doesn’t really help matters. The same song playing over and over again in the background during the scene is kind of a red flag that it might be going on too long. Plus there are plenty of “gaffes” throughout the film that give away its no-budget status. So it’s hard to shake the feeling that you’re watching some bare-bones boring crud.

On the bright side, there are some great late-80’s fashions on display, and most of the cast does their absolute best under trying circumstances.  Have you ever seen Ben Stiller's impression of Tom Cruise? That seems to be the acting style of Deke Anderson as the main baddie Tyler. Much of the rest of the cast seem to be non-actors, so no harsh criticism is coming their way, at least not here. Plus, there might be more subtext here than you might think. Due to some subtle clues, there might be a chance that this is actually a story of the forbidden love between Martin Towers and Danny. Truly one of the great star-crossed love stories of our time, I tell ya. If you ever watch the movie (or see it again if you already have), just take note of the dialogue and interactions between Martin and Danny. You’ll see what we mean. Maybe it’s not so far-fetched.

While we wouldn’t recommend it be the first AIP movie you ever see, if you can’t get enough of that AIP style, you’ll find some familiar entertainment in White Fury.

Comeuppance Review by: Ty and Brett
Posted by Ty at 6.4.11

I noticed Deadly Prey had a similar theme where you could infer that there was a metaphorical relationship between Danton and his adversary. Maybe it's an AIP thing.

haha. It probably is an AIP thing!