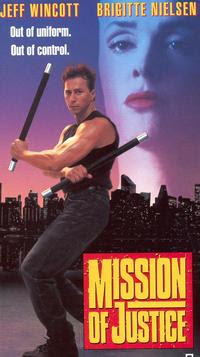 
"A rainbow often follows a storm."

Kurt Harris (Wincott) is a cop on the edge. He and his partner Lynn (Sheperd) do their best to stop crime in the city of “Eastgate” California, and luckily they both know martial arts, so they make a formidable team. But there are some other supposed "crimefighters” in town - a group called “The Peacemakers”. This group, reminiscent of Curtis Sliwa’s Guardian Angels, patrol the streets and try to stop crime as well. They train at the Mission of Justice, where they practice their karate moves and wait for crimes to occur.


Enter the sinister Dr. Rachel K. Larkin (Nielsen) and her brother Titus (Hues). Larkin is a ruthless politician running for mayor. She will use any lethal tactics necessary to get to the top, using the Mission as a front for her dastardly operations. Meanwhile, Kurt Harris quits the police force in disgust at its red tape and bureaucracy, and its many other problems, not the least of which is jerkface Sgt. Duncan (Kriesa). Because Harris lives to fight crime, he goes undercover at the Mission and becomes a “Peacekeeper” himself. He wants to not only stop Larkin, Titus and the Mission, but get revenge for the murder of his friend Cedric (Burton). But he’ll have to fight his way through many baddies to do so...


It’s fun to watch Jeff Wincott's vigorous, energy-packed fighting style. He makes a good hero. And yet another one named “Kurt”. After he becomes a Peacekeeper, he must wear the official goofy white T-shirt of the group. When he and his two compatriots patrol the streets, passing kids on bikes acknowledge them. It will remind you of Lenny, Carl and Homer in the “cat burglar” episode of The Simpsons. The way Cedric is killed and the presence of Brigitte Nielsen will remind you of Rocky IV (1985). Speaking of Nielsen, she was an interesting choice as the duplicitous, Hillary Clinton-like politician. For example, when she’s evil, in private, she has sinister-looking short hair. When she’s putting on her benevolent, public face, she has her “nice hair” on, which is long. Additionally, an Aryan foreigner running for public office in California predates Schwarzenegger by at least fifteen years. 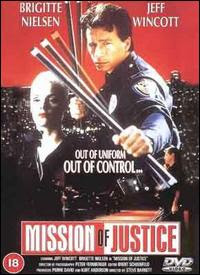 But back to the action, Wincott is in top form, Karen Sheperd (remember her from Above the Law in her fight scene with Cynthia Rothrock?) also displays some great moves, and we can’t forget James Lew in a supporting baddie role. Wincott fights Hues in the final battle, naturally, and there’s even some stand-out stick fighting. But like the movie Riot (1997), which is filled with great scenes but has the one stand-out, they-outdid-themselves fight scene (the one with the motorbikes), Mission Of Justice has a similar gem: the absolutely killer fight scene in the chop shop. The movie is worth tracking down for that scene alone.


The title is has a clever double meaning, there are painful-looking hits in the fight scenes, and the main cast really makes it all work. We give our full blessing to Mission of Justice.

Sounds like fun, Wincott and Nielsen is quite a combo, will try to track this down.

It is a lot of fun! Wincott is at his best and Nielsen and Matthias Hues play killer bad guys.

Great movie and a great review!

I loved this one too. Tons of fun, great stuff!

Agreed! This was a blast!

That was a killer scene! He destroyed everybody.

Wincott and Hues are at their best in this! Would be interested in your take on it.