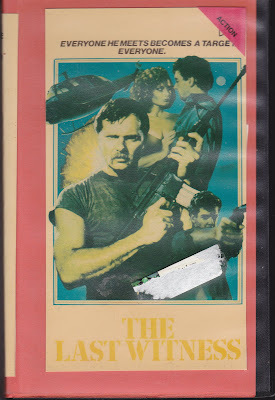 Henry Thurman (Henderson) has escaped from some sort of institution - either a mental hospital or a jail. He strangled a guard to death and is now on the lam. He steals a car with two women from a local rock band already in it - Bonnie (Finnerty) and Jane (Long). This liaison doesn’t last long and soon he’s taken in by a kindly man, Carl (Shuster). His wife Sara (Lubicz) doesn’t approve, because she’s seen on the news about the manhunt, but Carl convinces her to stow away the sullen weirdo. Thurman claims he’s just a victim of the government somehow, but that could be just his paranoia and supposed schizophrenia talking. It all comes to a head in the woods as a savage mercenary is out for Thurman’s blood. Will he get it?

Talk about your rarities. This basically-unknown film came out on the ultra-obscure Boomerang label in the U.S. The man responsible for this rare film is one E. Bruce Weiss, who directed, edited and shot the film. It’s not a bad effort, especially as it’s filled with many non-actors and was shot on a rock-bottom budget. But the movie’s pace is beyond leisurely - it’s downright SLOW. Nothing much happens and Thurman is not likable. Sure, Carl’s a heck of a dancer, but it’s not enough to save the glacial pace. 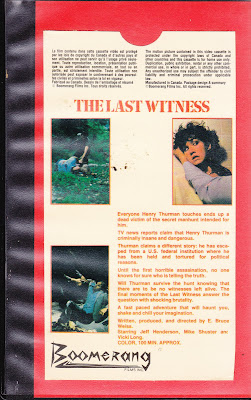 Luckily, the film is 83 minutes, not 100 as is stated on the box. It’s still overlong, however. But then again, the unknown mercenary is put front and center in the artwork along with the tagline “Everyone he meets becomes a target. Everybody”, leading you to believe this is more action oriented. Also the plot description on the back says it is fast-moving, so there are many lies.

You’d have to be a pretty hard-core VHS collector to have this one, or just stumble across it, as we did. Completists may want to seek it out for it’s oddness and rarity. Or fans of regional low-budget cinema may also be interested. 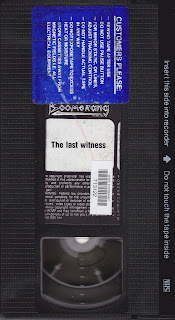 It seems the film was shot in the Cincinnati area and in rural Ohio. If anyone has any information about this film, please write in today.

Finding VHS rarities in thrift stores is a glorious thing!

It really is! We are going back to the VHS thrift store very soon. We will keep you posted.

I agree with EA. Now all I need is a VCR to play said rarities.

Wow, what a find.

Copyboy: Would be interested in what you buy on VHS when you get one!

Venom: It is an odd movie, i would say to wait until the price is in the single digits.

Hoaks2: Just saw the movie sitting there in the thrift shop we go to in CT. It is not even on IMDB.

Speaking of rarities, does anyone remember CED's? They were these huge video discs in square plastic sheaths that pre-dated Laserdiscs. If you can find them, they make pretty awesome displays.

Another rarity - I'm looking for a 1983 bear attack movie called Beasts. Definitely VHS only and not on amazon to my knowledge. You wouldn't happen to have it?

We have a friend who is a big CED fan! Also Needlevision or Discovision might be other names for CEDs.

About Beasts: We don't have it, but we will keep an eye out.

I am the Sharon listed as Assoc. Prod. (hardly) and Sound Effects Editor (TOTALY for real!)

Ignoring all the pain and bullshit involved in making and independent "feature," I still consider my work pretty cool.

BTW, you can see the trailer for "Last Witness" on YouTube -- I co-edited it with Emmy winner Doug Jines.

Thank you for taking the time to write in a comment.

We really appreciate it! Feel free to comment again if you think of any other stories or experiences.

Just saw on j4hi.com that they have THE LAST WITNESS and COURIER OF DEATH on a special dvd disc set for 30 bucks...