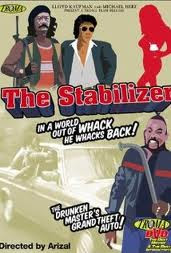 It’s always a joy when we come across movies like this. A true gem, finds like this are what make this site worth doing.

The Stabilizer is one Peter Goldson (O’Brian), a man who “stabilizes” the line between good and evil. He travels to Indonesia to bring to justice a truly sinister baddie: Greg Rainmaker (Gavin) is a gangster, rapist, murderer and drug dealer, and he and his second-in-command Victor (Sungkar) operate in the Golden Triangle. They kidnap a scientist, Professor Provost (Syah), because one of his inventions is a narcotics detector that would seriously impede the bad guys’ plans for world domination. After Rainmaker assaults Goldson’s wife, now things are personal. Goldson teams up with Johnny (Capri), Sylvia (Beanz), and Provost’s daughter Christina (Christina), among other helpers, to take down Rainmaker’s evil empire. Will this team of heroes be successful? 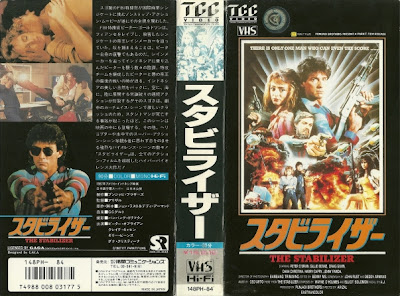 Man is this movie great. The opening theme song, sung by “AJ”, the Indonesian scenery and culture, the clothes, the dubbing, the wildly entertaining stunts, action and blow-ups, the music, the plot, the abandoned warehouse fights, EVERYTHING about The Stabilizer is just so fun, funny and enjoyable, you’ll be smiling the whole time. This is truly what purely entertaining cinema is all about.

Both Peter O’Brian (now a personal hero) and the Indonesian Mr. T guy can be seen in the Cynthia Rothrock vehicle Angel of Fury (1991). Now they, along with their great outfits, are back. Speaking of Rothrock, Gillie Beanz could have been the next one. Whatever happened to her? Gavin as Rainmaker has an evil beard, evil white suits, and evil spiked cleats that he uses to torture and kill people, when he’s not pouring little bits of beer on soapy women that just got out of the bath. His minions even have golden triangle earrings to show they’re with him. Never before has such an evil man met his match with such an utterly ridiculous hero. It truly is a great showdown. 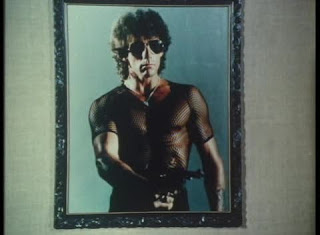 For all the talk of “DIY Filmmaking”, the film-school snobs never mention the true, resourceful masters that that term implies, such as the great director Arizal. He deserves much more acclaim and recognition. His movies deliver the goods on many levels. Not afraid of seeming silly, he goes for broke with the action, stunts and exploitation elements. God bless him.

While we don’t normally support Troma, we have to give them props for releasing this, to date the only Arizal film on DVD in the U.S. We hope they release more of his work. This DVD will provide hours of enjoyment for you and your friends.  We couldn’t possibly list all the standout moments. You just have to see it for yourself.

If you don’t already own this, just go on Amazon and buy it right now. You’ll be glad you did.

4 stars! Wow! Does this one by chance have a steam factory?

Haha. Unfortunately, there was no steam factory!

Stabilizer is absolutely classic and Arizal's best of what I've seen. Check out the joint he did with Christopher Mitchum called Final Score if you haven't already. It doesn't reach the same goofy and bonkers heights but the action quotient is just as off the charts. Mitchum is no O'Brian (who is?) but he rocks some incredible attire at the back end.

Wow, well I think I better just get go buy this one quick!

It is a lot of fun! I know you will enjoy it!

OMG this looks awesome. Indonesian Mr. T? Peter O'Brian in a mesh sleeveless shirt? Good times will be had by all!

It is unintentionally hilarious and awesome at the same time!

We are looking for a copy. O'Brian plays a character named Rambu!....it has to be awesome!

It's hard to ignore those standouts.

The Stabilizer is just 90 minutes of pure fun and insanity!

Where the hell are you getting these movies? I envy you Ty and Brett!

Thanks. We got The Stabilizer from Amazon. It is little pricey, but worth every penny to see Peter O'Brian's silly performance.

This looks intriguing. I may have to give it a look. Sounds pretty sweet.

It is very entertaining, DTVC! Would be interested in your opinion.