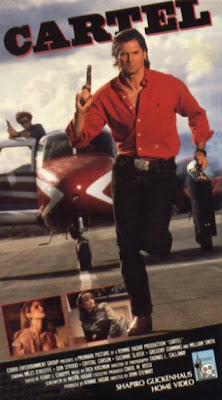 
Chuck Taylor (O’Keeffe) is a plane courier (not inventor of Converse sneakers), flying solo and delivering packages. One day, he unwittingly carries a shipment of cocaine across the Mexico border into California. Even though he’s innocent, he gets sent behind bars. The evil drug lord behind the bust is one Tony “The King” King (Stroud). He is also captured and sent to the big house, and then a prison movie scenario begins. King escapes, and Taylor follows. After King sends some goons, led by Rivera (Cummins) to terrorize Taylor’s family, he goes on a rampage of revenge to kill all the baddies involved.

Getting off to quite a rockin’ start, we see Miles O’Keeffe cruisin’ in his plane, wearing his aviator shades while the very Foreigner-like theme song, “Flying Blind” by Kenwood Hall pumps on the soundtrack. Because this is from the makers of the classic Action U.S.A. (1989), there are plenty of back-to-back action scenes and impressive stunts. It then goes to a prison scenario, with an underused William Smith, who really barks his few lines. There’s also a prisoner who looks exactly like Mr. Bean.

What’s great about Miles O’Keeffe is his unapologetic emotionlessness. He proudly can stand in the hall of wooden actors alongside Michael Pare and Don “The Dragon” Wilson, but with O’Keeffe it just seems like he doesn’t try to hide his expressionless acting in any way. And he says as little as possible. So a lot of the fun of Cartel, and other Miles outings, is his acting style.

Interestingly, one of the Martial Arts choreographers on the film was Isaac Florentine, later to be a well-known DTV director in his own right. You can see the roots of how he learned his craft by watching Cartel.

It is a tad on the long side, and even though it is filled with action and stunts, it’s not quite as good as Action USA, but very few things are, so don’t take that as an insult. It still has a similar vibe, and Cartel is well worth checking out.

Check out our buddies, Direct To Video Connoisseurs' and Explosive Action's take on it too.

I agree it was a tad on the long side but I didn't notice it as much as I would normally with these sorts of films. O'Keeffe is brilliantly wooden!

With that cover, how can it not be awesome?

Michael Van Zant: Haha, those are great! Will have to brainstorm some other ones. Will shoot you a comment on your site when we think of some more!

Hoaks2: It is a killer cover! O'Keefe is awesome in this.

Right on! I think what Cartel needed was a killer title. Hard to compete with Action USA on that front ...

Agreed! Action USA is an amazing title (and an awesome movie). Cartel is an ok action movie title.

This was one of the films that started the DTVC, and it's great to see both you and Explosive Action giving it its due-- in the same week no less! Great stuff guys.

Thanks a lot, DTVC! This was a lot of fun!