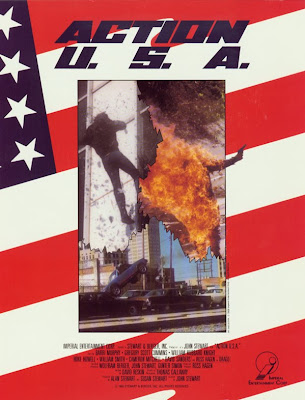 
Action U.S.A. is simply awesome! From the title on down, the movie delivers in every possible way.

Truly the Crank (2006) of its day, the plot blasts off when rockin' dude with an attitude Billy Ray (who drives a hot Corvette with the license plate SLEEK 1) is offed by some gangsters and his girlfriend Carmen (Murphy) goes on the run and goes into the police protection of FBI agents Clay Osborne (Cummins) and Panama (Knight). The bad guys bring in the big guns with Drago (Hagen), a cowboy with a big gun and a bad attitude. They are on the trail of some stolen diamonds Billy Ray supposedly had, and that the gangsters want, including Frankie Navarro (Mitchell) and corrupt agent Conover (Smith). Will Osborne and Carmen develop a relationship while on the run? Will Panama be okay? Hang on to your seat!

One of the genius things about Action U.S.A. is that the filmmakers were smart enough to give it a simple plot so they could include the maximum amount of action, and the film is a speedy 80 minutes. The film is by stuntmen, and for the fans. Because they worked in the stunt industry, they had a firm grasp on what the audience really wants. On top of the non-stop crazy stunts, chases, helicopter stunts and blow-ups, there is actual chemistry and humor amongst the cast! The good guys are likable and the bad guys are evil/funny. This movie truly has it all.

The characters of Clay, Carmen and Panama work off each other perfectly, as do the baddies Drago and his henchmen Lucky and Hitch. Clay and Panama have a pre-Roddy Piper/Billy Blanks thing going, but with less bickering. They also have some great outfits, such as Panama's black suit and pants with white socks. He also has a belt AND suspenders. Those pants aren't going anywhere. But I digress.

Shot in Texas, the film bears a bit of a resemblance to Sno-Line (1986) in some ways. There is a much better than average barfight, but everything in this movie is above average. The game is really stepped up here. If you see this somewhere, you must buy it because it has a lot of re-watchability. If this ever was to be remade by Hollywood, it would be filled with CGI junk and stupid tricks. This has stunt after stunt made by the pros, and it's great to watch. It's the real thing. It's refreshing.

There are some great songs to complement the action, and the music is by Del Casher, the inventor of the wah-wah pedal (although no wah's are heard on the fist-pumping soundtrack).

This movie is a hidden gem and a true fan favorite. It has to be the best thing ever put out on the Imperial label.

The presence of genre favorites Cameron Mitchell, Ross Hagen and William Smith brighten the movie even more. They all look like they are having fun. If this movie has any flaws, it's that it could have used a bit more Cam. That's really the only negative to this engaging, thrilling, fun and upbeat experience!

You had me at Crank! This looks amazing Ty, I will hunt it down.

Dude! I've never heard of this one. But I feel as a true fan of action that I "must" see this!

wow, apparently it's not available at any of the places i'd usually get it from. i can only seem to find a vhs, which is pretty expensive for a vhs. any chance you'd be willing to do a trade for a copy?

I know you will love it, RobotGEEK!

We have 1 copy of the VHS but, i know a guy who turns VHS movies into DVD-Rs. I will talk to him right away about making a copy. Would you want to trade a copy of Peacemakers or Raiders of Atlantis?

hey man, since you provide me with such awesome reading material, i'll get you copies of both. :)

Thanks, Buddy! That is very nice of you. I will email you my address right away. Also i just talked to my friend who turns VHS into dvds and i will be going over there this week.

I need to see this movie

You will love it, Chris! Action USA rocks.

Been torrent searching for this forever. If anyone can up this I would be eternally thankful.

That would be awesome if someone can upload this to youtube. It is a classic.