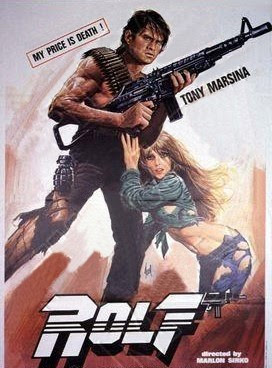 AKA: The Last Mercenary


Rolf (Marsina) is a fairly troubled loner working as an airplane courier in (what we think is) Tunisia. He’s trying to forge a relationship with Joanna (Nichols) but things are always going between smooth and rocky. When gangsters want him to carry a shipment of drugs, he is conflicted, because his mother died of a drug overdose. The gangsters beat him up and assault Joanna. Rolf then has no choice but to go into the jungle and get revenge. Rest assured, huts will explode and guns will go “pew pew”! Will Rolf come out victorious?

If you’re going to name a movie after a man’s name, Rolf is one of the better names you can name it. With its silly dubbing, absurd situations, good pace and killer music (by Fabio Frizzi - the Modern Talking-like title song is sung by one Chris J. King), Rolf comes out a winner. For example, after he is attacked by the gangsters, Rolf summons the power of worms and leeches to heal him. Presumably he has Dr. Doolittle-like powers? And the main bad guy is so evil he literally uses children for target practice. When Rolf’s hands are injured, it recalls not just fellow Italian production Django (1966), but also none other than Jesus himself. Far from a dude with a “shirtless shirt” and high pants, the filmmakers secretly tried to make Rolf a new hero for our times.

Try to imagine a crazy Italian cross between Cartel (1990), Heated Vengeance (1985) and Best Revenge (1982), but better. And the main song repeats over and over again as in Laser Mission (1989) and White Fire (1984). Luckily it is catchy and enjoyable. We were lucky to see this movie, as it doesn’t seem to have gotten a wide release, but the version on the “Mercs” DVD box set leaves a LOT to be desired. It looks like a simple dub directly from an old VHS - and the VHS has tracking problems! There are even glitches burned into the DVD. Wasn’t anyone monitoring this stuff? Again, we were lucky to see it, but Rolf deserves better.

Tony Marsina really Rolfs it up in this simple, but crazy and down-and-dirty revenge thriller. We recommend it.

Exploding huts and pew-pew guns! I laughed out loud and pretended to shoot a few things with my finger going 'pew-pew' after I read that. No, I am not high.

Haha, Got to love the "pew-pew" sounds! I believe you are not high.

Finally! Been meaning to see this but now you put me over the edge to do so :)

Cool! Looking forward to reading your take on it. :-)

I'll have to check this one out, it looks like a lot of fun, and I've been meaning to get into more low budget Italian flicks. Great stuff.

I think you will enjoy it!

Sounds great fun Ty, I'll look this one up.

I still got this on VHS as 'The Last Mercenary' and whilst it's an ok exploitation movie...The theme song is what stays in your head (long after the tape has rewound and ejected itself) It's a real cheesey euro-pop number (with a Mick Jagger sound-a-like)

Love the (clearly stolen) 'Gauntlet' artwork on the poster, as well.

Definitely agree about the catchy song!