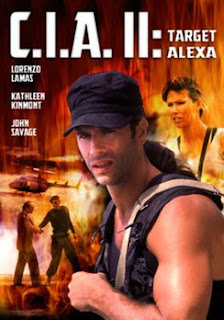 
Since the last “CIA” film, Alexa (Kinmont) has given up working for the government and now relaxes in a small town, content to raise her daughter on a horse ranch. She thought she put her former life behind her, but Graver (Lamas) comes back into the picture. He asks her to infiltrate yet another criminal organization, to get yet another microchip, which would control yet more nuclear weapons. This time around, the main baddie is Franz Kluge (Savage), and his henchmen are Straker (Ryan) and Lana (Fetrick). Will Graver and Alexa be able to work together again to defeat the bad guys? And who can you really trust?

Lorenzo Lamas must really care about the CIA franchise (such as it was at the time) and the character of Graver, because he stepped into the director’s chair for this one. Sure, this movie didn’t really need to be made, as it covers very similar ground to the first film while not being as good - but this movie is a lot funnier than the first one. The dialogue is sillier than ever before and some of the situations are pretty ridiculous. But it all has the backing of the classic PM stuntwork and blow-ups behind it. 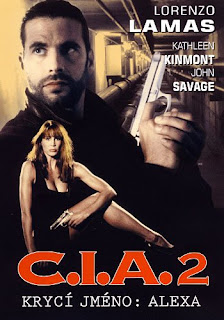 Alexa’s daughter has a horse named Fred the Horse, Lamas continues on with his tank top/black hat combos for his wardrobe, and his hair is much funnier and more feminine this time around. It’s truly “dueling ponytails” for both him and Kinmont. John Ryan was last seen as the baddie from American Cyborg: Steel Warrior (1993), and his name in the film, Straker, is one we’ve seen before (last seen being used by Richard Norton in Raiders of the Sun, 1992). John Savage plays a toned-down, but very similar character to the one he played in Red Scorpion 2 (1994), and he even has some dialogue involving scorpions. Weird, eh? Plus his international criminal organization seems like a boy scout camp, and his minions even dress that way.

Lori Fetrick is mainly known to American Gladiators fans as Ice, and her presence here shows this film as pure 90’s. She looks like Jenna Jameson but with much more ripped arms. I wonder why OJ Simpson didn’t return for this sequel?

While not strictly one of the better PM’s, this does have comedy, chemistry between Lamas and Kinmont, and does have the Lamas you want to see, all told. It has another noteworthy Louis Febre score, plenty of blow-ups and shooting, and is still of a good quality all around. 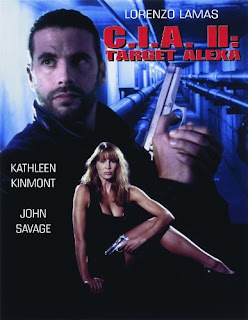 While it can be confusing trying to determine the difference between “Code Name Alexa” and “Target Alexa”, if you must see only one, go with the first (Code Name). But this one isn’t bad at all, it’s still worth watching. It’s just a little bit unnecessary.

I went back and looked at my review, and I had this as a so bad it's good one. Loved the hang gliding scene-- reminded me of Cave Dwellers--, and loved Brandscombe Richmond's cameo, completing the Renegade cast. Great stuff.

Totally agree! It was so bad it's good. Watched Renegade a long time ago. I should re-visit the show.

And I love when actors step into the directors chair: that just makes for amazing entertainment.

Love her too! Kathleen Kinmont rocks!

This sounds like a good time! Have you done Snake Eater yet? I think there's like 17 of them.

Both CIA movies have a lot of fun moments.

Haha, we did review Snake Eater. Only the 1st one though. Lamas should make another Snake Eater film!