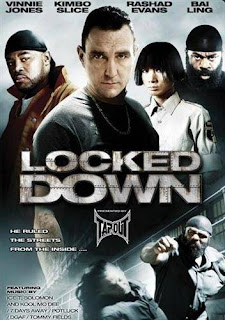 
In Chicago's Blackwater state penitentiary (not to be confused with the covert ops organization), mob boss Anton Vargas (Jones), rules the roost. Everyone is on his payroll, including the warden and the guards. He runs Punchfighting matches in the basement of the prison. Meanwhile, undercover cop on the edge Det. Danny Bolan (Schiena) is involved in a drug bust gone wrong where he's framed and mistakenly sent to Blackwater.  While inside, he faces off against Vargas and his Punchfighting minions in order to survive. That includes criminals he himself put in jail.

This modern-day Punchighter is another 90-minute commercial for the TapouT brand. While Circle of Pain (2010) has more TapouT product placement than Locked Down, still, somehow, inmates in a maximum security prison have have TapouT shirts and hats.

These TapouT ( we feel very silly adding that last capital T, just so you know) productions always manage to get one B-list name - in Circle of Pain it was Dean Cain, Beatdown (2010) has Danny Trejo, and here we have Vinnie Jones. He is underused as the baddie, and this role doesn't let him live up to his full potential. He wears the same outfit the whole movie and doesn't say that much. As for Kimbo Slice, the filmmakers tacked on some unrelated plot about him fighting people in Florida. The word "shoehorned" comes to mind here. Tony Schiena is such a meatheady dolt - more than usual - I didn't recognize him at first. 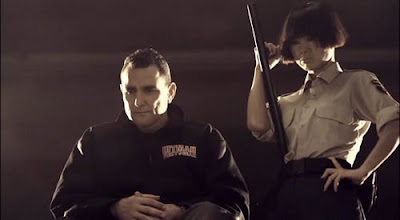 There are a lot of classic clichés on display: Bolan tells Vargas "we have a lot of history together", the scene where a guard says to the incoming prisoners "this is the end of the line" and "you can't do anything without my say so", and at one point Bolan even says "this might sound cliched, but my father was a cop...my grandfather was a cop..." Also, Bolan's shrew of a girlfriend whining, telling him he can't a be an undercover cop because she never sees him anymore. The lifer/trainer of  the Bolan character, and much more.

Despite some of the negative things we've said so far, Locked Down is really not that bad for a modern-day Punchfighter. These movies hark back to a late 80's/90's style of filmmaking, which is decent, but what ruins that is all the horrible nu-metal music over the top of it all. Tunes such as "Wildfire in the Streets" by Tommy Fields, and other bands such as "Stabbed", "Eject", "Dgat" and others offer their selections as well. The most ridiculous song names a bunch of real-life fighters and how they are all going to, and I quote "pop your hood". What this means exactly is open to interpretation. 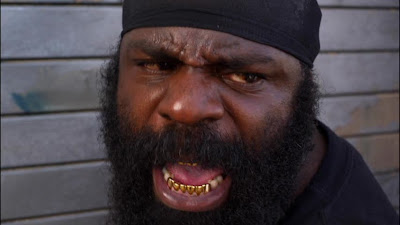 As far as the fights, they have all the slow motion and quick cuts you might expect, as well as the choreographed pulled punches, but at least they seem to be TRYING.

Locked Down is worth seeing if you liked Circle of Pain or other TapouT vehicles. It's more of the same.

I had no idea TapouT was in the movie business. I wonder if Kotex could do the same thing with chick flicks ...

Haha, that is a great idea! Maybe they can make movies about foxy boxing or female MMA.

Also they would have to get a B-list actress like Shannon Tweed or Angie Everhart to be their coach.

They'd also have to capitolize the X and come up with a cool subtitle ...

Haha, That is pretty gross!

How ironic, I just rented this film from my local library, fortunately it was one of those free rentals, so it's no big loss, and I definitely agree with you on the foxy boxing thing, i'd love to see a film with Christina Cyborg, Gail Kim and Gina Carano(who's in Stephen Soderberg's upcoming film Haywire, which looks BADASS)

Would be interested in your opinion of Locked Down after you watch it.

Also I agree with you about Haywire! It looks awesome.

Wow, building an entire movie off of product placement sounds depressing as shit. Nonetheless, this does look like a relatively fun movie, Vinnie Jones is always amusing, at least...looks like it'd make a good 3 AM stoner movie.

It is definitely not horrible, but it could have been way better!

Just saw this and I pretty much agree with your assesment of the film, the fights were decent and Tony schiena was acutally pretty good, but there definitely one too many cliches(though I did actually like the nu-metal soundtrack, i'm a sucker for thatkind of music) Locked Down basically felt like a lesser version of Bloodfist 3.

Thanks! I agree, some of the fights were decent, but the movie could have been better. About the nu-metal music: a lot of it is silly, but pretty catchy!

I enjoyed the movie (to the point of buying it) and I thought the fights were well edited. Bai Ling was under-used though (and her sex scene with a bloated looking Vinny Jones was pathetic) I also noticed some Ice T and Kool Moe Dee on the soundtrack....so I'm more than happy. Need to get some more reviews up on my blog (it takes me ages)

Definitely agree about Bai Ling. There were some decent moments, but wished bloated Vinnie fought in it.

Also: hope to see more reviews from you soon.

I'll maybe give this a go. I won't expect too much.

Would be interested in your opinion, Ricky! It is ok, but should have been better with the cast involved.

I might have enjoyed this movie, but I couldn't see anything in it. The fights were obscured by extras and chainlink fences and myriad jumpcuts. It made me seasick, and I think there should be a warning on the cover for people with epilepsy. That was too bad, because this could have been a very serviceable Death Warrant retread.

Can't agree more, Vinnie, Bai, and Schiena were ok, but the fight scenes is what we want to see and they were too haphazardly edited to enjoy.