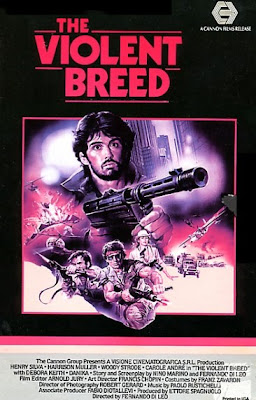 
Back when they were all in ‘Nam together, Mike Martin (Muller Jr.), Kirk Cooper (Silva) and Polo (Strode) were the best of buddies and they always looked out for each other: saving children, rescuing hostages and even pulling bullets out of each others’ bodies.  This team of soldiers worked together well, with their expertise being in surprise attacks. To the shock of Mike and Kirk, Polo willingly stays behind in ‘Nam.

Years later, both Mike and Kirk are CIA agents. It turns out that Polo is one of southeast Asia’s worst offenders when it comes to drugs and arms smuggling. He’s working with the Russians, the Mafia, everybody. So Kirk sends Mike to Bangkok to find his old compatriot Polo and stop his evil doings. While there, he meets a hooker with a heart of gold, thanks to the “comic relief” French madam (La Loggia), and they take on Polo’s army (yes, he commands his own army) of goons. And what is Mike’s girlfriend Sharon (Andre) up to? Dare you try to find out?

The Violent Breed is your classic jungle/exploding huts shoot ‘em up with constant gunfire and explosions. After a while, it all gets pretty numbing. Muller is the glib, wisecracking hero who always seems to land on his feet. While he fights the baddies, his Harrison-fu is on full display. Silva and Strode, both great actors, could have done much more with their meager roles. 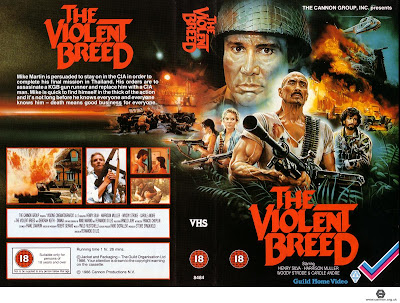 Director Fernando Di Leo has done considerably better work than this in his career, and everything in this film seems to drag on and on. Perhaps he was just trying to fit in to the then-current Italian action boom, but this one falls pretty flat. You’d have to be a pretty big Harrison Muller Jr. fan to try to track this one down. Seeing as we’ve reviewed FOUR of his movies to date, Comeuppance Reviews seems to be your one-stop Harrison Muller Jr. shop. Who else can claim that?

Seemingly a continuation of The Final Executioner (1984) formula (both have Muller and Strode), and again released by Cannon/MGM in those cool big boxes on VHS (as was its predecessor), The Violent Breed, despite its promising name, is middle-of-the-road action at best.

One stop Harrison Muller Jr. shopping is a great claim to fame! I'll have to do a big Italian B-movie binge at some point and take a chunk of these in. Sometimes movies like these are better in groups. I haven't done anything like that in a while, and these flicks seem like as good a place as any to start.

Cool! Looking forward to your opinion on all of these. Gotta love Harrison Muller Jr.!

I wonder why these jungle huts are so volatile? All you have to do is wave a match at one and BOOM!

Haha! That is so true!

I remember being disappointed in this as a teenager, as that UK video sleeve is fucking awesome. No way the film could have ever lived up to that.

It is the same thing with the U.S. sleeve! It unfortunately happens all the time.

If you want to see Strode kick some serious ass....then check out "The Professionals" and also "Keoma" Woody was the man yo!

Will do! Love Woody Strode. Thanks for the suggestions!