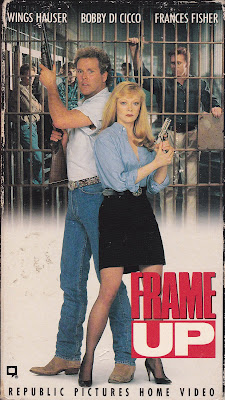 Something is rotten in the small town of Orton Creek, California. Some fraternity punks, during a particularly mean-spirited initiation, kill a young pledge. The evil leader of these sadistic ne’er-do-wells is one Don Curran (Hodges). Fearing for their futures, they pin the murder on traveling salesman Frank Govers (Picardo). Govers gets wind of what’s going on and, because of some misdeeds in his past, takes his young girlfriend Lee Ann (Fairfield) and they go on the run.

Meanwhile, Sheriff Ralph Baker is on the case. Hoping to escape the noise of Los Angeles, he moves with his young daughter to Orton Creek. He runs into trouble when he realizes the town is under the control of land developer Will Curran (Sargent) - a man just as evil as the aforementioned Don, his jerk of a son. Seeking justice, Ralph teams up with fellow law enforcement officer and love interest Jo (Westlake) and they attempt to get to the bottom of the whole sordid mess. But will they do it?

Wings puts in a strong, likable performance and has good screen presence here. Frame-up is not really an action movie, it’s more of a drama. It’s decent, even if it seems a bit “made for TV” at times. Apparently it warranted a sequel at one point in time, but it was never really released. I guess we’ll never know the continuing saga of Ralph Baker. Sidebar: Does Wings really look like a guy named “Ralph”? 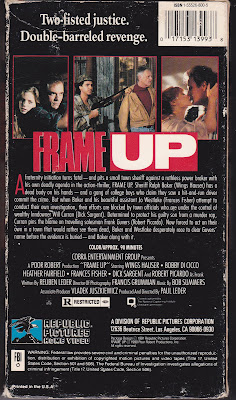 You really hate the frat boys (except for the token “weak link” kid that wants to tell all to the authorities – you know these guys go in for some hard core hazing when they force the pledge to eat a lizard. Eat a lizard! And it’s alive. Next thing we know, the kid is inexplicably covered in feathers and running down a hill. I know. We don’t get it either.  But as they warned, he may never become a “true bro”.

As far as Dick Sargent is concerned, perhaps he, in 1991, really wanted to shed his “Bewitched” image, so we are treated to the sight of seeing this classic 50’s TV star wearing acid-washed jeans and cursing like a sailor. But he gives a nice “boo-hiss” bad guy performance.

The Robert Picardo subplot is pretty influenced by the Peckinpah film The Getaway (1972), and he and co-star Heather Fairfield do a nice job, especially Fairfield.

Overall, Frame Up is decently entertaining and Wings fans will want to seek it out for his solid performance and the fact that this is one of his lesser-known vehicles.

As if Wings could give anything less than a solid performance ...

You can always count on Wings! He is always entertaining. We have more of his movies coming soon.

Sounds OK-ish, though Maximum Security was a much more entertaining prison action film.

Hmm, haven't seen that one. Will have to check that out. This was a little boring at points. It needed more action.

Man, you're putting me to shame, I think this is two Wings flicks since my last one. This looks like the kind of one that you get to after you've done a lot of his better ones first-- to make sure you're rally a Wings guy, but why wouldn't you be? Great stuff.

Thanks! You are absolutely right. This is an ok Wings flick. Wished it had more revenge on the evil punks.

I think it sounds pretty exciting! It's a pity, I never heard of it. :|

Would be interested in your opinion on it, Real Queen Of Horror!

You ever notice how certain people just fit a time period? Wings Hauser looks like 1991 personified. The build, the hair, the wardrobe - that guy is a perfect storm of 80's/90's righteousness.

Can't agree more! Some other examples would be: Madonna and Freddy Prinze Jr.

And Chuck Norris. For reasons unknown, a Walker, Texas Ranger Christmas Special was on this morning. Of course, I watched it.

Haha, I also watch the show when it is on.

Love the Wings always, but that is a seriously bad video cover.

Yeah, you're right. They should have made a different one. It's not very accurate either. Wings and Frances Fisher don't really fight side by side in the movie.