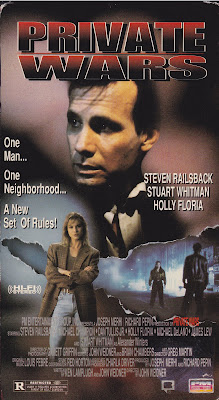 Jack Manning (Railsback) is a cop who works the seedy streets of Hollywood. Because he plays by his own rules, he is kicked off the force for insubordination. After eight years, he has hit the skids and has become a raging alcoholic. He's also a private investigator. When the local 'hood starts being terrorized by the local hoods, Manning's old cop buddy Mo (Tullis Jr.) seeks his services. It turns out these aren't random street assaults, but a conspiracy that goes all the way to the top. The top being the prerequisite evil land developer Winters (Whitman). He's sending the aforementioned punks to drive out the locals because he wants the property. But can Manning clean up the community - and his own life - before it's too late?

Private Wars is pure PM enjoyability at its finest. It has all the classic PM stuntwork we all know and  love - whether the action scene in question has to be there or not. At the flimsiest setup, action ensues. You gotta love it. And the fact that it's all spearheaded by Steve Railsback makes it all the more interesting. Whether oddly cast as an action hero or not, try to imagine Anthony Perkins as a "I'm gonna clean up this town" - style sheriff who drinks heavily and inexplicably has almost superhuman fighting abilities and you might get the picture. 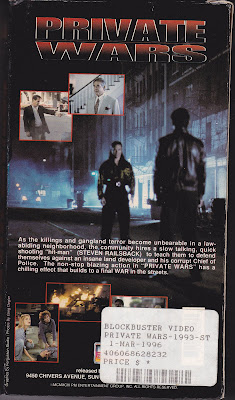 Throw in a huge dose of The Annihilators (1985) and you have a comic-booky staple of the Fighting Back (1982)-style "Take the Neighborhood Back!" movie that was so prevalent at the time. And while Ronnie is the love interest with the Christina Applegate-like good looks, special marks must go to Dan Tullis Jr. as Mo. His wonderful performance steals the movie. It should also be noted that Michael Delano and Vince Murdocco are on board as well, which adds to the fun.

But the baddies are great too. Especially James Lew as Winters' bodyguard. But the street punks are so great - they strut around town with their boomboxes against their ear (I guess iPods have eliminated this practice) and listen to NWA-like rap music.

It's important to point out that there is a large dose of humor in Private Wars, as exemplified by the "mercenary casting" scene. You'll know it when you see it. It's definitely a highlight of not only this movie, but of the whole PM canon that we've seen to date. What's great is that, whether by accident or design, this movie is so outrageously unrealistic it's hilarious and a genuine treat to watch.

Private Wars deserves better recognition. It's entertaining, funny, and a good time will be had by all who see it. Who could ask for more?

Comeuppance Review by: Ty and Brett
Posted by Ty at 5.9.11

Great write-up! This sounds incredible! I'm a sucker for shoulder-mount boomboxes (especially if they conceal rocket launchers - but there's none of that here is there?). Definitely putting this one on my list.

This looks solid gold. Glad to see another good PM is out there waiting for me to buy!

Dr. Blacksteed: Thanks! Haha, we wished it concealed rockets!

Explosive Action: It is a blast! Steve Railsback at his best.

Oh yeah, that "recuiting" scene was comedy gold! and Steve Railsback is the man! He was also excellent in "Made Men" with Jim Belushi.

Can't agree more, Venom! One of our favorite recruits was the random accountant.

Steve Railsback always delivers. Will have to watch Made Men.

great review man! i love unexpected action gems like these! i'll have to track this down.

Thanks! It is a ton of fun. Hope you can see it soon!

I added this to the roadmap a few months back based on the participation of James Lew and Vince Murducco. Is there enough fisticuffs to justify it as a martial arts film? Either way, I'm looking forward to it.

There is not enough martial arts in the flick. Just some fistfights and explosions.

Looking forward to your take on it!

About time i checked this one out since it´s been standing on the shell like, forever!

Haha, can't wait to hear your opinion about it, lizzardking!

Do you have any more movies that have been on the shelf for that long?

Looks like a great movie. How would I go about getting a hold of said film? Is it on Netflix?

It is on Netflix. Could be a short wait though. We got our copy on VHS from amazon dirt cheap.

Railsback is awesome! Lifeforce....and he played Charles Manson once.... There's no way this cannot be good!

Totally agree with you. Railsback rules! He is at his best here.

I'm skimmed your review because I'm planning on checking this out at some point too, but I like that it lives up to its PM Entertainment label. Also like that you tagged Vince Murdocco.

It does live up to the PM label. Got to love Vince Murdocco.