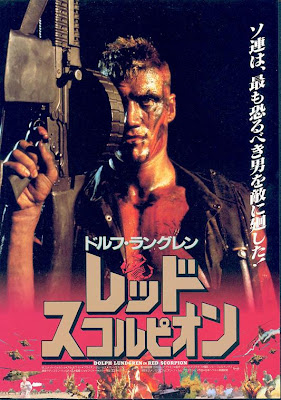 
Lt. Nikolai Rachenko is a Russian Special Forces soldier assigned to go undercover in Africa to root out an anti-communist leader, Kallunda (White) - don’t forget, Rachenko’s superiors are all commies. While in the midst of this deep cover, Rachenko becomes sympathetic to the anti-communist cause and realizes he has been manipulated by the higher-ups. So he goes on an explosion-packed killing spree, shooting and, when need be, dismembering his enemies (hey, it was an emergency). Rachenko may seem like a man of stone, but it’s clear he yearns to be free. Along the way he meets an obnoxious American journalist, Dewey Ferguson (Walsh) and an elderly African tribesman shows Rachenko his human side.

With a movie starring Dolph Lundgren, directed by Joseph Zito (forever in the hall of fame for Invasion USA, 1985 alone), and produced by Jack Abramoff (rumor has it his “evil hat” was an uncredited co-producer), you’d think the results would be just a bit more impressive. Not that Red Scorpion is bad at all - but it’s too long and the middle section drags. Perhaps that’s just to lull us before the big final battle, but it’s quite a lull. There’s no reason for this film to be 100 minutes. With the pedigree involved in the movie’s production, it’s not unreasonable to expect more. 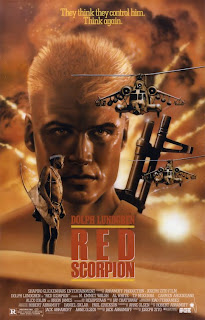 The film has some really high-quality, impressive explosions. The team that worked on the pyrotechnics should be applauded. And of course, the hero gets tortured (there are some really impressive effects there too), but there are some nice underlying plot ideas in addition to the many “blow-ups”:  1. Think for yourself, 2. Communism sucks, 3. A friendship can exist between a geriatric African bushman and a blonde, Swedish hulk even if they don’t speak the same language 4. The intrigue of “who are the real enemies?”, and of course, playing the same, repetitive Little Richard songs over and over again will remind everyone of America’s greatness and freedom. 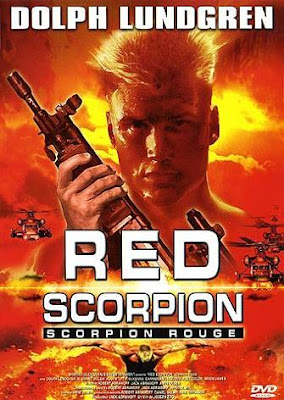 Interestingly enough, the one American character, Dewey, is obnoxious and unlikable throughout most of the film. If this movie is just a propaganda piece for the U.S., they aren’t helping their case by portraying Americans that way. But we do learn the secret of the “Red Scorpion” tattoo - later seen as the only, tenuous (at best) link between this film and its sequel. But there are actual scorpions in the movie that crawl on Dolph’s body. Whether they are “Red”, i.e., commies sent by his superiors, remains unknown. 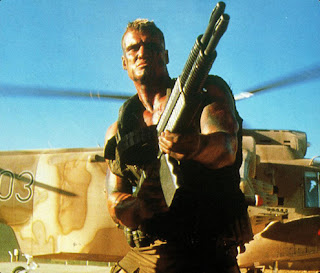 There were a lot of anti-communist 80’s action movies, but this one has Dolph Lundgren, and apparently the filmmakers were so impressed with their explosions, rightfully I might add, that during the end credits, there are continuous explosion sounds. You don’t see them, you just hear them. While you may know what to expect with Red Scorpion, its messages help it stand out.

I agree that this could have been better, and it's mainly down to that middle section which drags like a half severed leg.

Far too much wandering around in the desert in the company of two people who don't speak the same language.

Apparently they made a sequel - no Dolph - in '94. Anyone seen that?

We totally agree with you, if they tightened up the middle section, this could have been a Dolph classic. We have a review of Red Scorpion 2 on the site in our archives. It is a very silly sequel!

I like this movie, but yes it does have its flaws. Call me crazy, but I actually liked part 2 better.

I love Dolph month! Such a great time this month reading your views on Dolphs best and worst.
I don't really remember anything from Red Scorpion, but I'm eager to check it out soon. I hope despite the lagging mid section, it has some kind of redeeming quality with the combo of Dolph and Zito.
Great job guys!

Yea hi'll amdit the middle section did lag a bit, still a fun film nevertheless, though admittedly the sequel is a bit better because it dosen't lag very much at all by comparison and John Savage makes for a great villain!

Ahhhh...I did not know Zito did "Invasion" one of my favorite guilty Chuck pleasures! No wonder I still remember "Red Scorpion" somewhat fondly!

Ryan1234: Hmm, that is cool you like part 2 better. There were more silly moments and John Savage at his best.

RobotGEEK: Thanks, buddy! Really appreciate your support of Dolph Month!

Venom: John Savage was great as the villain! "THE WIND!, THE WIND!"

This gets a Blue-Ray release now in Germany on 25h of November 2011. unrated and widescreen.

Nice! Hopefully one day, the U.S. will get a similar release.

This was like a bad 1950s Red Scare film, which was fun for us, but still very silly. And I agree, M. Emmett Walsh was horrible.

It was fun, wished it didn't drag so much. M. Emmett Walsh was used slightly better in Missing In Action.

Synapse is releasing a new DVD and Blu-Ray combo pack this June.

Definitely excited to see it on DVD! Thanks for the link.