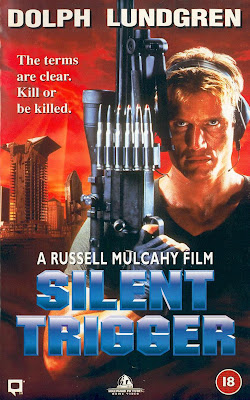 
Waxman (Dolph) is an ex-Special Forces soldier, and expert marksman. Sometimes his emotions get in the way of his targets and will end up in a crisis of conscience. Now holed up in an unfinished skyscraper with his female assistant, Clegg (also known as Spotter - Waxman is also known by Shooter in some sources) (Bellman) - Waxman and Clegg must execute their new assignment, as well as survive the night in a creepy building with bad guys after them. Will they make it?

Well, the movie certainly lives up to its name, as Dolph doesn’t really say that much here. Apart from that, this was the beginning of a phase of more serious-minded films from Dolph, leading up to Hidden Assassin (1995). In Silent Trigger, however, there’s a lot of set-up in the plot (perhaps too much), but what’s good about this movie is that it is at least trying to be different. What helps that are the stylistic flourishes by Russell Mulcahy that provide atmosphere and interesting shots, camerawork and set design. 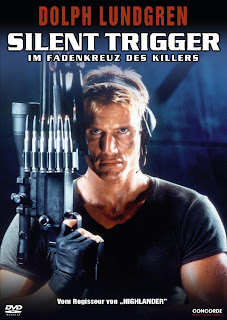 On the flipside of that, however, the fact that the movie takes place in one location (except for Dolph’s flashbacks/memories) impedes the movie, even though the set is impressive. Additionally, many scenes needed more light and were too dark to see. And there needed to be more goons for Waxman and Clegg to dispatch. So in summation, we liked what was there, so we wanted to see more of it: more locations, lights and baddies. That would have helped this movie a lot. 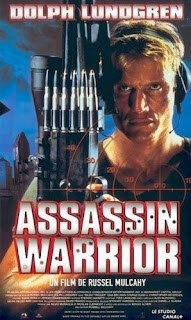 On the bad news front, there is some really stupid and unnecessary (well, it’s always unnecessary) CGI at times. And it’s 1996 CGI at that. The inanity of these few moments shouldn’t put you off seeing this movie, we just like to point out when this happens as a warning to potential viewers, and take the opportunity to say how much we hate CGI. There’s also the classic “one really, really annoying character” cliche we see often. But the violent bits that are in the movie are great, and that keeps the viewers’ interest. 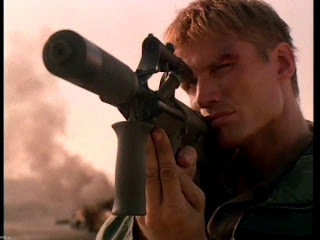 Also it should be pointed out that Dolph has an extremely large, complicated gun. When he’s assembling it, it reminded us of the scene in Spaceballs (1987) where the ship keeps going and going and going. This thing is a monstrosity, but it does some serious damage.

Shot in Montreal (it has a very Canadian feel), Silent Trigger is worth seeing but it’s not the best Dolph vehicle out there.

What was Gina Bellman like in this? For someone in the UK her name stands out. She made her name in Black Eyes written by one of the UK best playwrights. So seeing her in a Dolph Lundgren film, well it's unusual to say the least.

Yeah, watched this a few years. Remember it being not bad despite being set in one location - nice offbeat idea for an action film - but they didn't really pull it off.

Mulcahy can do very stylish films but this needed a writer and director who knew how to make one set exciting and tense. I thought they were really struggling when they randomly made the security guard a psycho.

Also, Gina Bellman, the main woman is British and is mostly famous over here for a playing a ditsy character in a show called Coupling. It sort of ruined the vibe for me.

Nevertheless, the film was good effort and a nice change of pace for Dolph.

I have this in my queue. I didn't realize Mulcahy directed this. Now I'm really curious to see it.

Exploding Helicopter: It was pretty odd, but she did a decent job playing a mercenary.

Jack Thursby: She was pretty funny on Coupling, it was change of pace for her and she did a good job. Would be interested in a Gina Bellman action flick.

Your Dolph knowledge is second to none. Amazing! Love the review.

Great job!
I've also had this in my queue forever, just haven't gotten around to it. Most of the reviews I've read pretty much the same, stylish, but no substance or enough action. I dig Mulcahy as a visual director too, I think he's the reason I haven't removed it from my queue. I'll get to it someday. lol.

Ty, did you get your nomination badge? Please, check out your e-mail. :)

RobotGEEK: Lol, a perfect to get to someday. Dolph and Bellman are a good team.

Nebular: Hmm, haven't gotten it yet. My email is Tarbosh777@yahoo.com

I just watched it yestersay...the cheap cgi helicopter explosion was baaad, and the guard was soo annoying and so not needed...why choose a building with ppl guarding it, at all for a sniper location? A truly wasted possibility at a great movie...with some movies you must ask yourselve ..why . oh why did u think that was a good idea, dear scriptwiters..well..sadly that happens a lot especially with dtv.

Real Queen Of Horror: Yeah, he is still acting and making action movies. He will be in The Expendables II next year.

Hellford667: Totally agree about the CGI helicopter explosion and the annoying security guard! It was really lame. If that wasn't in the movie, this could have been a solid action flick.

My favorite part of this one was when Dolph beats the crap out of Chris Hayerdahl, then handcuffs him to a nasty toilet.

That was great. One of the best scenes in the movie.

WTF? This is almost a masterpiece, its one of the greatest assassin films ever made .. I recommend rewatching this movie.

Its actually a loose remake of Black Narcissus. Will donate to the website if you give this another view, even if yo feel the same way afterwards.