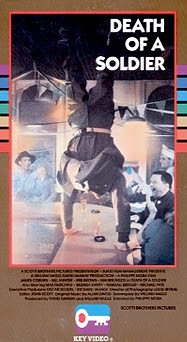 In Melbourne, Australia, in 1942, World War II is raging. Thousands of U.S. servicemen are in Australia to help combat the Japanese. But there’s a black sheep among the many uniformed soldiers: Private Eddie Leonski (Brown). It seems Leonski has strangled three local women. This is causing big problems between the Australians and the Americans, who seem only to have an uneasy alliance as it is. This incident could damage relations so badly, the Americans might have to leave, allowing some Japanese victory. So detectives Adams and Martin (Hunter and Fields, respectively), are civilians trying to catch the killer, while the U.S. army is also trying to find him. Among those who want Leonski’s head is Maj. Dannenberg (Coburn). But due to a twist of fate, Dannenberg must defend Leonski when the case goes to trial. Dannenberg then begins to believe that Leonski might not be fit to stand trial, even though many forces want to make him a sacrificial lamb to save face.  Will there really be a DEATH OF A SOLDIER?

Death Of A Soldier isn’t the typical type of film we review - but we checked it out because it stars fan favorite Reb Brown. We’re certainly glad we did, as the film, which is based on a true story, is well-thought out and well-nuanced. It has great period detail in the production design, but also from a scriptwriting perspective, it explores the tensions between the Australians and Americans during a time when everyone was on edge, but without showing either side as a caricature. The movie gets into moral, legal, political and personal sides to the Leonski case in a way that is skillful and never jumbled. Truly this is a movie worth seeing. 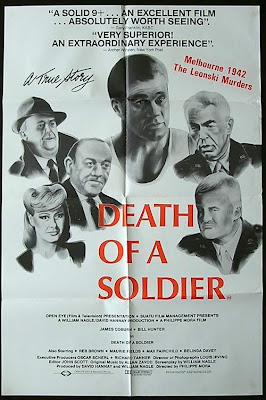 Reb Brown is perfectly cast as the big lummox Leonski. One minute he’s sweet and innocent, another he’s a menacing serial killer. He plays the role with a lot of sensitivity and understanding. It really shows that Brown can act and should have had the starring role in more movies. Those who only know him from his more meathead-y roles should really see his fine performance here. Even still, in this more “serious” role, he does his trademark scream. But to counterbalance his more wild side, he also sings. James Coburn puts in a very human performance as well, and his weighty presence anchors the movie. We also loved the perpetually grumpy Australian cops, and pretty much everyone involved fits and does a great job. 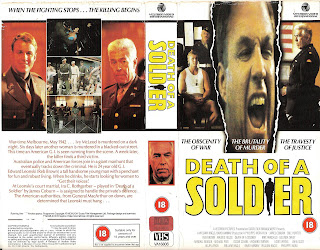 When we first found this movie, we thought that because it is a movie that came out on VHS in the 80’s and had Reb Brown, it was going to be a Vietnam shoot ‘em up. But really it’s a quality mystery-drama. But it even has some mild horror elements. Leonski compares himself to Jekyll and Hyde, specifically pointing to a movie poster for the Spencer Tracy version of the film. Further driving home the theme of the psyche with two sides, he also compares himself to a werewolf. Interestingly, director Philippe Mora the next year directed Howling III (1987) - and Reb himself was in Howling II (1985). Coincidence? But Mora uses close-ups (an especially memorable one of Frank Thring of Man From Hong Kong, 1975 fame stands out) and odd angles to flesh out the story of Leonski psychologically. It’s a shame he went from well-handled material like this to utter dreck like Mercenary 2 (1999). It happens, we suppose.

Released on Key Video here in the U.S., Death Of A Soldier is recommended, simply because it’s a well-made historical drama that’s thought-provoking. And where else will you see Reb Brown and James Coburn together?

Wow, more Reb eh, and in one of those sexy rainbow-stripe Key Video boxes no less.

This is one of the more serious Reb movies we've seen. He was really good.

This week is all about Reb. On Friday, we are posting the final movie: Strike Commando!

Never heard of this one, but glad to hear Brown did do material to prove he can in fact act. Is it just me, or is that a weird cover for the U.S. VHS release?
Great review though! If I ever come across this, I'll be sure to check it out.

It is a very odd cover! Reb dancing on his hands....

Oh wow. Reb and an Australian theme. Sounds like I really need to check this one out.

Reb Brown and James Coburn? I'm sold. Need to check this out soon!

Definitely interested in your take on this serious Reb flick! Coburn puts in usual good work too.