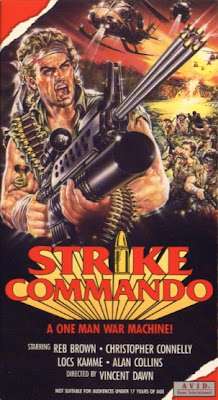 "He's A War Machine on the Warpath!"


Sgt. Michael Ransom (Brown) is THE BEST. He’s the finest example of an American soldier...maybe ever. He goes behind enemy lines to rescue some Vietnamese civilians, and even becomes friends with a young boy, Lao (Edison Navarro). His guide in this rough terrain is Frenchman Le Due (Pigozzi) - but maniacally evil Russian Jakoda (Vitale) will stop at nothing until he tortures and kills his nemesis, the “Americanski”. And even though Col. Radek (Connelly) may have suspicious motives, nothing, and we mean NOTHING - will stop this true American hero from getting revenge on the baddies. One way or another, you WILL pay Ransom.

Now THIS is what Comeuppance Reviews, as a website and as an overall entity in the universe, is all about. Ignore anything negative you may have read about this great movie. For pure, uncut, unadulterated entertainment, this level of awesomeness is possibly only rivaled by Deadly Prey (1987). This movie gives jungle action movies a GOOD name. It has countless, high-quality explosions, guard tower blow-ups/falls, non-stop action, stunts, and shooting, waterfalls, and of course the prerequisite torture scene. But it has a ton of weird/funny/off-kilter moments that truly make it rise above the pack. We won’t spoil them for you here, but trust us, you will love this movie and you have to find it if you don’t already own it. 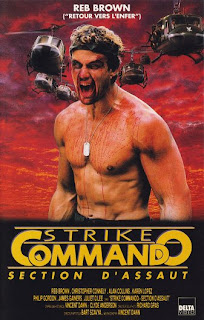 While we also strongly support the later collaboration between the great Reb Brown and director Bruno Mattei, Robowar (1989), we believe this is the superior team-up of the two men. If you can’t get enough of that trademark Reb scream, you won’t be disappointed, as he really yells it up here. That includes a specific line reading of his enemy’s name, “Jakoda”, that you won’t soon forget. Probably because your ears will be ringing for days afterwards. But yet, Reb displays his sensitive side here too. For all his ultra-macho shirtless carnage, his relationship with Lao is tender and even tear-jerking. Lao wants to go to Disneyland where the popcorn grows on trees. For some reason, this really appeals to him. But, you see, Ransom is not an inhuman monster like Jakoda. He may have killed a few thousand people, but he’s a real human being who you grow to love. You definitely want Ransom on your side. God help you if you get on his bad side. 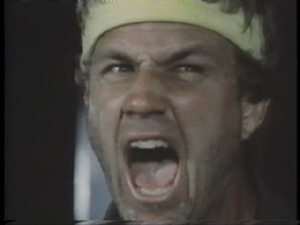 Like Jungle Assault (1989), the soundtrack is inappropriately 80’s  (it being the Vietnam war and all) - but here the music cues are just so great it doesn’t even matter. The soundtrack by Lou Ceccarelli is pure genius. It features a killer opening song and it doesn’t stop there. Nintendo was huge at the time, and the music plus the action is almost like a live-action Contra movie. It truly is violent 80’s heaven that you can really sink your teeth into. Is there a CD of this?

The worst thing you could say about this masterpiece is that the editing can be a bit choppy at times, but even that adds to the overall charm. Strike Commando delivers the goods in spades. Rock on!

Greatest. Movie. Ever. Reb Brown is priceless in this one.

I remember there being a part in one of the last fights when Reb Brown blows up a guy and jumps off a cliff and its reused footage from Robowar when the robot explodes.

Mr. Gable: This really is the best movie ever! A Reb classic.

Thanks! Totally agree. It is awesome, every time Reb yells, the movie gets better!

Been loving these Mattei reviews, lately. Makes me want to have a mini-Mattei marathon at my home.

Would love to see your take on some Mattei flicks too!

Absolutely crackin' film!! I remember watching this film as a kid until the tape snapped. Great review Ty.

When they both headbutt each other at the end, I always spit out whatever I'm drinking at the time.

John: Thanks! This is such a blast to watch. That is awesome you watched this as a kid.

Lee: That is One of our favorite scenes too! Laugh out loud funny!

Absolutely fantastic! Thanks again to Explosive Action for hooking me up with this one, because I don't know what my life would be without. Great review of it too, really letting people know that this is what they came for.

Thanks! Strike Commando (and Robowar) are the perfect movies and makes the site worth doing.

Yeah, you can't get much better then this film. Just so you know, Strike Commando 2 is availible on Youtube.

Thanks for that info! Will have to watch it soon. Always wanted to see the sequel.

Never heard of this one but it sounds amazing.

I love all these Reb Brown reviews! All I can say is MOVE! MOVE! MOVE! GO! GO! MOVE! AHH! MOVE!

Ricky: It is awesome! If you love Reb Brown, you gotta see it for his hilarious screaming!

To my shame I haven't seen this, off to Amazon.

This is just non-stop silly fun! Looking forward to your take on it!

Wow. Deadly Prey was pretty awesome, Mike Danton's screams still echoes in my brains, so... I have to check this flick inmediately!

Thanks for the kind words.

If you loved Deadly Prey, you will love Strike Commando. Reb Brown at his best.

You wrote such a glowing review of this movie that I had to check it out. Since I had seen all the Cirio Santiago movies, I was looking for a good Rambo clone, and this one really hit the spot. The sequel is more of a comedic Indiana Jones/Rambo mix, so the first part is clearly the superior movie. Heck, this movie even made me want to go to Disneyland. Perhaps Disney should do a remake?

Totally agree, this is the definitive Rambo clone. Reb was great. The sequel couldn't be topped by the 1st.

Glad you enjoyed it.

The older I get I cannot believe films like this once existed. Even though I've seen this dozens of times I'm in disbelief every time I watch it. I struggle to remain composed at the sheer, glorious ludicrousness unfolding. The bit where Brown blows the guy apart at the end with the grenade launcher is rudeness beyond compare. I don't want to sound like the old guy saying things were better in my day, but man they just were. This is why.

Don't ever be ashamed of saying that things were better back in the day: they clearly were! Could a movie like Strike Commando be made today in our PC age? We think not, which is why this site - thanks to engaged readers like you - CELEBRATES the golden age and has a great time doing so. Rock on and write back soon!