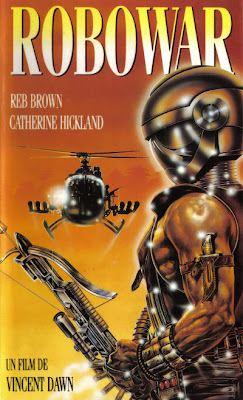 
Major Murphy Black (Reb) and his team are sent into the jungles of the Philippines to track down and destroy a rogue robot.

Much has been made that this is just an Italian knockoff of Predator (1987) and Robocop (1987) (but especially Predator)...that’s all well and good, but, that aside, is this movie worth seeing? The answer is definitely yes! For a movie with almost no plot, it‘s surprisingly fast-paced, and rather than have a lot of dialogue, it’s mainly yelling and shooting machine guns. However, there are some gems, such as “You walk like a ruptured duck!”. Maybe something was lost in translation, but we’re sure glad it was. There are other silly one-liners, but this was our favorite.

Fan-favorite Reb Brown is out in force here - looking especially ripped in his child-size half-shirt, he gets to command his team with his trademark screams. But let’s not forget about the cool nicknames of the people he’s stranded in the jungle with - “Blood”, “The Hunter” and “Papa Doc”. Naturally, they were picked for this mission because they’re “The Best”. As for the robot, we get some pixelated “robo-vision”, and it seems like a guy in a motorcycle outfit. But he also has a confused, scrambled, “robo-voice” as well, which seems heavily influenced by Buck Rogers’ Twiki and his famous “bidi bidi bidi”. It doesn’t exactly inspire terror, but hey, who’s to say how we’d feel if we were in that situation? 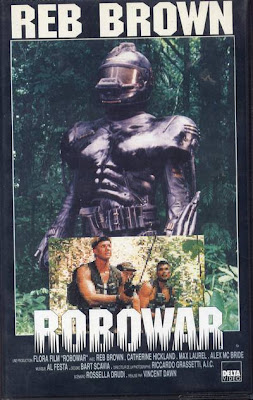 As if this wasn’t awesome enough, the robot can shoot lasers. Of course, they’re of the “pew pew” variety! That alone raises the coolness quotient of this movie. And because this never received a VHS release in America (maybe they didn’t want to roll the dice with rights issues?), we were sadly deprived of this minor gem in the 80’s and 90’s. Honestly, it’s still pretty hard to find, presumably having been released largely in Japan and Italy, and we thank Sutekh over at Explosive Action for hooking us up with a copy. 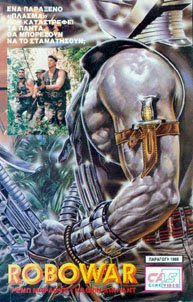 If you ever wished Predator was an Italian-made Exploding Hut movie shot in the Philippines, and had a robot instead of a “Predator”, this is surely the movie for you. Featuring a great synth score by Al Festa and released in the golden year of 1989, Robowar is shameless...ly entertaining fun.

I was sold at Bruno Mattei/robot/Philippines.

Robots! Heavy predator influences! Ruptured ducks! I'm so in! This looks like way too much fun to pass up. Great review!

The Goodkind: You can't go wrong with that mash-up. Definitely interested in your take on it.

M. Hufstader: Thanks! It is a Reb Brown at his silliest. I know you will love it.

This movie and Yor: The Hunter from the Future are easily my top 2 Reb Brown movies.

Man, I love this movie so much. I love how every situation is answered with them blasting into the jungle with every weapon they have and then there's a kick ass synthesized walking montage between scenes. It's just the best.

I watched this on YouTube. It's probably still there for anyone needing to see it. It is EXTREMELY Hard to find so I suggest that for the time being.

We totally agree and it should more well-known and easy to find. And there is more Reb on the way!

This film is also availible on Ioffer.com I believe.

Super glad you got to this one Ty and cheers for the shout-out! Robowar is complete gold and I've turned at least a dozen friends onto its magnificence. I'm torn between this and Strike Commando as my favourite Reb, but I think if pushed I would pick Robowar. RE-CEIVE RE-CEIVE RE-CEIVE.

Venom: Cool! The more people see it, the better!

Explosive Action: Totally agree, thanks to you, we can witness the magic of Reb and Robowar. Strike Commando is dropping on Friday!

I just tracked a japanese vhs on ebay in the last days...it went to 40 euros or dollars, not sure which now...This is a totally silly movie...the good kind..and I admit that the scene shortly before the end was rather touching.

Definitely agree! This had a lot of really great moments along with the silliness.

Aw man, I was wondering when you were gonna get to this one. What a WTF? classic. So shameless in almost every aspect, which is what makes it so great. Somebody somehow needs to release this sucker officially someday. There's definite money to be made there. Great review guys!

Thanks! We definitely agree. More people need to watch this Reb classic.

This one is fucking sweet, one of my favorite ripoff movies ever! More people should be aware of Reb and his crazy yell'n'shoot antics!

Anytime Reb yells and shoots it is gold! This is a perfect example. Same with Strike Commando, which is dropping on Friday!

Thanks again to Explosive Action for hooking me up with this one too. And I love that you gave this four stars. That's the kind of treatment a movie like this deserves. Great stuff.

Thanks again! Robowar is just 90 minutes of Reb gold.

Buck Rogers! I knew I recognised that noise from somewhere.

Just caught this at the weekend. Hilarious movie. Great review.

Thanks for the kind words. Glad you enjoyed the movie too.

I have long been amazed at the popularity of this movie.
I had a blast making it.
John P. (Papa Doc) Dulaney (the Duck walker)

Thanks for dropping by the site John! That's great you had a blast making it. If you have any more stories about Robowar, respond back anytime.

Severin has released this scanned from the original negative on DVD and Blu. Just watched it, and was never bored. I was a bit irked by the score which often sounds like a NES (Nitendo Entertainment System) video game soundtrack. Then again, it is effective in the places where it need be. I tried it with Italian, but it seems most of the cast were speaking English. The English subs are for the English soundtrack, which is obviously the 'primary' track. It really is an impressive release. I never liked Predator - this is better [sorry, Jesse].

Definitely planning on picking up the Blu-ray. Speaking of the soundtrack, it is included with the Blu-ray. So win win for sure! Also thanks for your review link. Appreciate it.

Hey there - sweet review of this batshit movie! - I need to ask - what made you want to seek out and watch Robowar? I'm intrigued to understand how this became a cult hit!