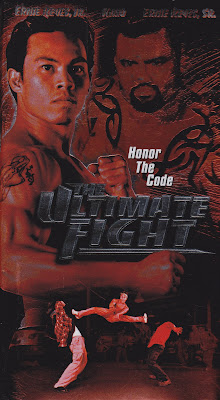 
When Pinoy (Inocalla), a Martial Arts fighter, leaves his home country of the Philippines for the first time and heads to Seattle in America, he gets more than he bargains for. He ends up meeting Jesse (Reyes Jr.) and befriending him, and ends up in his circle of buddies, all of whom love Martial Arts. But there’s a problem: a man who just happens to be named Hitler (Nemec) is a cross-dressing drug kingpin who is using the Crazy Dragons gang to do his bidding. Hitler’s bodyguard is one Kimo (Kimo), a guy who isn’t afraid to use his scary bulk at the drop of a hat. Eventually, Jesse and his buddies must face off against the Crazy Dragons and stop Hitler’s drug running. Can they do it?

With the storyline of the rural Asian fighter coming to the big city and impressing everyone with his skills, try to imagine a much, much, MUCH stupider Ong Bak (2003). The Ultimate Fight is an extremely amateurish, even babyish movie. With its many scenes in the backyard (or interior) of a house, it seems like if you gave a 5 year old a crayon and paper and asked him to write a movie script, and the kid was into Karate, this movie would be the result.

The Ultimate Fight suffers from many things: its low budget, a horrendously written script, stilted performances and disjointed editing. We seriously want to give every benefit of the doubt to this movie, but the weight of its sheer dumbness is overwhelming. 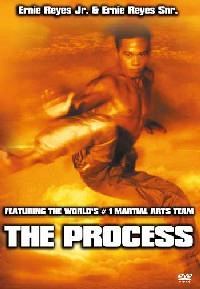 As for Corin Nemec...maybe Parker Lewis couldn’t lose, but Nemec certainly can. His self-consciously “wacky” performance is not quirky, it’s just annoying. His over-the-top mugging gets tiresome fast. His hand movements even have that cartoonish “whooshing” sound, but it’s just insulting to Isaac Florentine. But it might be all worth it for a scene where he’s talking to his African-American drug associate on the phone, and he says, in a cool, casual and laid-back tone, “Hitler, my man.” It’s not everyday you hear those words coming from a Black man. Nemec’s performance might be at home in a Troma movie. To see an awesomely OTT performance, check out Sam Jones in In Gold We Trust (1991).

In the positives column, there is some cool Martial Arts, including some stick-fighting, and they even use the term Arnis, which we learned when we watched the movie of that name. There are a couple of classic meatheads, including a goon with a face so square he gives Howie Long a run for his money. There’s a scene in a game room which is cool because our hero uses all the things in the room to fight the baddies, including a pair of cleats, leading to the new phenomena of “Cleatfighting”. In the plot department, there’s some half-hearted attempts to add some Jesus references, but none of that makes much sense. But that’s the overall problem. The Ultimate Fight becomes hard to watch because it’s not really a cohesive movie, it’s more a collection of random scenes that aren’t connected to anything. 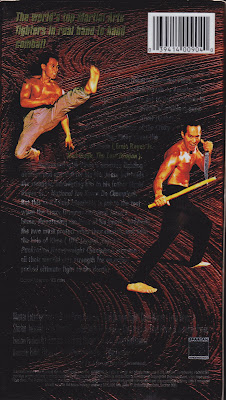 This movie was originally entitled The Process, and when you watch it that makes sense because characters say those words many times. But it was retitled to cash in on the emergence of UFC at the time, which Kimo was involved in. The box art features the classic The Wild Pair (1987)-esque formula of son-funny name-father: in that case it was Beau Bridges-Bubba Smith-Lloyd Bridges, now it’s Ernie Reyes Jr.-Kimo-Ernie Reyes Sr. Plus the tape is printed in this weird gloss that makes it hard to read, but somehow they managed to paint/superimpose a knife in the hand of a certain character. But it’s not all bad, as there is a trailer on the tape for the Steve Guttenberg vehicle Airborne (1998).

We can’t wholeheartedly recommend it, but The Ultimate Fight might work for you if you’re in dire need of some “Kimo-therapy.”

Oh yes we did! Haha. Kimo was at his best!

I always thought Ernie Jr was highly underrated and should be bigger then he is. I thought The Rundown would change that but sadly it was never meant to be.

We agree. Ernie should have gotten more time in the sun. But we'll always have "Surf Ninjas".

He was! He played a character named Keno. Keno?...also Kimo? pretty similar! Haha.

"Kimo therapy" huh? You're right, sometimes I do need a little Kimo Therapy. I usually just pull out a bunch of Kimo posters and hang them on the wall, play his UFCs on a loop on the TV, turn the lights down, and relax-- I think I may have said too much!

Haha! You can never have enough Kimo!