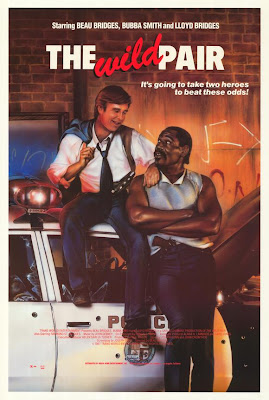 
Benny Avalon (Smith) is an L.A.-area cop who is beloved in his neighborhood. He’s very close to taking down drug kingpin Ivory (St. Jacques), but then FBI agent Joe Jennings (Beau Bridges) enters the picture. It seems Ivory is connected to an extremist group called “The Sentinel”, whose leader is the fanatical Hester (Lloyd Bridges). Now forced to work together, the hulking Black cop with a heart of gold, and the somewhat nerdy White agent truly put the “odd” in the phrase “They’re the original odd couple!”

Buddy cop movies featuring a Black guy and a White guy, along with some comedic elements were huge at this time. The Lethal Weapon series, Downtown (1990), Running Scared (1986), and many others showed us that differences in race don’t matter as long as you’re working together to take down the bad guys. So they obviously struck a blow for civil rights. The Wild Pair does this especially, because the supposedly racist hate group headed by Hester actually does business with Ivory, a Black guy, showing the hypocrisy of hatred. Okay, I’m being a tad facetious, but it’s all there. Beau Bridges shows off his acting and directing prowess here. He should have been in more action movies. He even has an homage to Psycho (1960) in the mix as well to show off his talents behind the camera. But no one really knows Beau as a director.

Complementing Beau is the great Bubba Smith as Avalon. Known primarily as Hightower in the Police Academy series, here we see another side of Bubba. He’s still a cop, but he loves kittens and the children in his neighborhood all know and love him. He even engages poor kids in strange activities such as something called “The Emotional Orchestra”, where a conductor with a baton directs groups of kids to laugh or cry on command. Keep in mind this was before iPads and the internet, so kids had to do something to pass the time. Another great facet of Bubba is his high socks. He wears white socks pulled up to his knees consistently throughout the movie (so it can’t be a coincidence). This must be a factor in getting kids to love him. Or bad guys to hate him. We’re not sure yet.

There are a lot of funny details in the movie, such as the WYC (White Yelling Chief) and his office at the police precinct with a poster that declares “Terrorists”. Plus, Hester’s grandson (presumably another of the Bridges family) has a My Pet Monster. And as Avalon and Jennings travel through a variety of seedy locations to catch the baddies, they go to an adult movie theater showing Laure (1976) and there’a a poster for Sex World (1978). But there are a lot of the cliches we all know and love as well, including (besides the aforementioned WYC), the prerequisite torture, the barfight, the fact that Avalon and Jennings don’t get along at first and are forced to trust each other, and the sax-drenched soundtrack by John Debney, among other examples. If you like this sort of thing, it’s here. If not, steer clear. Hey, that rhymes.

Also noteworthy is a small part by Creed Bratton and the fact that the movie includes the mano-a-mano fight we’ve always wanted to see: Bubba Smith vs. Lloyd Bridges! What other movie can claim that? It really is a sight to see. Finally, The Wild Pair seems to have initiated the box-art formula of “Son-funny name-father”. Here it’s “Beau Bridges. Bubba Smith. Lloyd Bridges” used to draw in the video store patrons. For The Ultimate Fight (1998) it was “Ernie Reyes Jr. Kimo. Ernie Reyes Sr.” It’s truly a winning formula guaranteed to bring in the viewing public.

So while The Wild Pair does seem a bit like a TV show or movie at times, and isn’t the most cutting edge of all movies, for an unchallenging, mildly amusing Saturday afternoon watch, this should fit the bill.

Also check write-ups from our buddies, The Video Vacuum and Cool Target!

Thanks for the plug! Great review as always. I didn't enjoy it as much as you guys did, but I think we both can agree that the adult movie theater scene was a classic!

No problem about the plug, buddy. Thanks! Definitely agree about that theater scene.

That's an excellent review, have never seen the film but I will. Cheers Ty.

Thanks so much for the kind words, John. We appreciate it. Looking forward to your take on it. Bubba Smith was really good.

I saw this movie on TV about 20 years ago. I enjoyed it and think your review is very accurate. The box-art formula of "son-funny name-father" was later reversed and also proven a winner in politics with George Bush-Bill Clinton-George W. Bush. ;-)