In the future, two rival gangs are vying for turf: the Clippers and the DA’s. Lee (Stockwell) leaves his rural life behind and heads to the big city to be part of the action, and gets embroiled in the gang warfare. Mainly this includes riding around on modified motorbikes and wearing silly outfits. But their masks are pretty cool. Even more trouble forms in the guise of Carver (Benson) who wants to control the city, or possibly the world, and is willing to use the gangs towards his evil ends, even pitting them against each other. Will Lee and his buddies prevail?

At the outset of this movie, we’re informed that what we’re seeing is “fifteen years from now”, but the Vestron VHS box tells us the movie takes place in the distant future of 2003. But one character’s Masters of the Universe coat really tells us what decade we’re in. But apparently Steven Seagal’s personal style had an impact, as a lot of people in the future wear fringed jackets.

While City Limits isn’t quite in Shredder Orpheus (1990) territory, it is a bit reminiscent of Wired To Kill (1986). These are not favorable comparisons, as this movie seems like it could have been directed by Albert Pyun. When are filmmakers going to learn that annoying characters doing annoying things does not a movie make, and you cannot skip character development. Isn’t that movie-making 101? 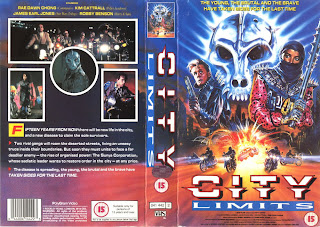 This movie makes no sense, and it’s hard to imagine anyone, whilst making it, thinking it was a good idea, much less NOT a total waste of everyone’s time, but here you go. It’s total shelf-filler tailor made for the expanding video store market in the 80’s. It seems only the Italians can make entertaining post-apocalyptic movies.

Basketball fans may get a kick out of the fact that one of the roving street gangs in this movie are called the Clippers, but it falls on deaf ears for mostly everyone else, including us. Also Robby Benson does what we call a “sit-down” role, where a character never moves from his seat. 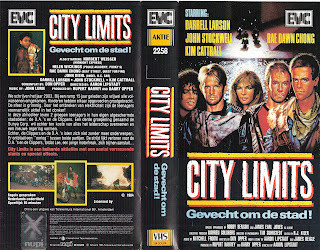 Why did James Earl Jones agree to be in this? Sure, this movie may be boring, pointless and adds nothing new whatsoever to the post-apocalyptic genre, but the filmmakers were shrewd enough to realize Jones has a commanding voice, so they had him narrate this slog.

Seeing as how it was the 80’s, and JEJ wears this brown fur coat in the movie, and how he’s the narrator of course, only one thing comes to mind: Teddy Ruxpin. But this movie is an insult to Mr. Ruxpin as whoever wrote the cassette that was placed in James Earl Jones did a horrible job. Only Jones’ professionalism prevails.

It’s easy to see why MST3K chose to do this movie. It’s just weak on pretty much every level.

I gotta disagree with you on this one, I thought this film was pretty entertaining and the cast did a pretty good job, hard to dislike any film that features Jones, Cattral, Chong and Stockwell.

the gangs' names are the clippers and the DA? how can they not wear basketball jerseys and suits?

Venom: We agree the cast they got in this movie is pretty good, but the movie around them was pretty boring in our opinion!

Saturdaynightscreening: Haha, we know! If they wore jerseys instead of fringe jackets, this movie could have been better!

Were the 80s the golden age of post-apocalypse movies? Seems people made a lot of them then. Can't help thinking it's a Cold War thing. Nuclear apocalypse doesn't seem so possible now, so people don't make these types of films as much. Or do they?

Good point! It must have been a Cold War thing.

They don't make too much of these types of movies anymore and we say good riddance, because usually they have a dearth of action and more complaining from the characters! Haha.

MST3K did make it watchable though. "Look, it was so windy last night the cows stuck right to the side of the barn!"

I was considering this for my MST3K week early last year. Looks like I made the right choice in avoiding it! At least it has Kim Cattrall.

You definitely made the right choice! We got suckered in by the cast...it is a huge waste of time.