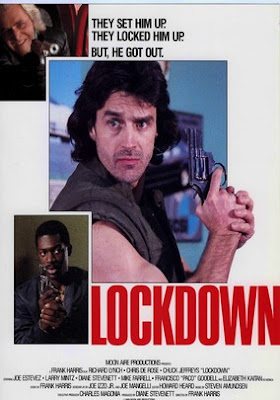 Ron Taylor (DeRose) and his partner Maguire (Jeffreys) are detectives in southern California. Using a San Jose chop shop, Valley Auto Dealers, as cover, a new criminal mastermind is causing all sorts of havoc: Garrett (Lynch) is a ruthless killer and car enthusiast who uses his intimidating presence to get what he wants. When he frames Taylor for murder, Taylor is sent to prison, separating him from his wife Monica (Kaitan) and his young daughter. Maguire is pulling out all the stops to try to clear his partner, but now Taylor must survive on the inside. Shanks (Kalpakoff) is the jailhouse baddie, but Taylor makes friends with his cellmate Dieter (Estevez). Will Taylor get revenge and clear his good name?

This is the fourth Frank Harris movie we’ve reviewed, and while it may be one of the more decent ones, it still has plenty of cliches, is kind of on the slow side, and suffers from many of the common trappings of low budget movies, such as some stodgy acting and editing. But that being said, this is a fairly solid, if dumb, prison movie/cop actioner.

We think Harris may have even used some of the same cop extras he did in Killpoint (1984). DeRose makes an okay mulleted, fairly meathead-y hero, and Chuck Jeffreys out-Eddie Murphy’s Eddie Murphy. We always like seeing him. Of course, Taylor’s cellmate is none other than Joe Estevez (how would you like to walk into your cell and see that?) - actually, this is the best Joe Estevez performance we’ve seen to date. But the real star of the show is Richard Lynch, who makes an excellent bad guy. He does a great job as the charmingly evil mastermind (as he usually does). As great as Lynch is here, it’s not enough to overcome some of the slower aspects of this movie. 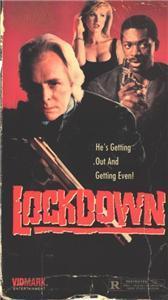 Actually, the fact that the main hero is trapped behind bars hampers the movie. It needed more action, and if the main hero is in prison, it can’t really be a full-throttle revenge movie. While the filmmakers were probably trying for something a little different, they painted themselves into a corner with that scenario.

So despite the fact that the warden is like a corrupt Santa Claus, the prison sequences are a bit dull (the warden should have been played by Cameron Mitchell). Lockdown is similar in structure to Cartel (1990), but Cartel is the better movie. 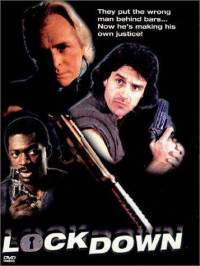 Lockdown isn’t really that bad, especially for its drive-in style, and it does have some standout moments, especially the song by Seymour Duncan and Friends (with vocals by Gregory Hansen).  So it’s kind of a mixed bag.

Dude, I know I don't comment as much on your site as I should, but I just wanted to tell you how much I love your reviews, even if I haven't seen many of these flicks haha.

In a hungover stupor, I did rewatch Cliffhanger this weekend. Love that movie. "A fool proof plan... you stupid bastard."

Thanks! We really appreciate the kind words.

Haha, Cliffhanger is a Sly classic!

Haha, how good is that poster.

I need to check this one out. I imagine two stars is probably a good number for something of this caliber.

This is definitely a two-star movie...mainly for Richard Lynch's usual good performance.

Great review! I love how they are all holding there gun the exact same way on that cover. Priceless. lol.

Thanks! Haha, that is really funny....if only the movie was as silly as the cover.