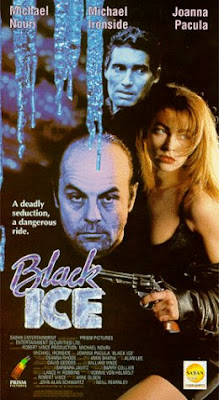 
Ben Shorr (Nouri) is a destitute cab driver with plenty of debts. He’s an aspiring author eking out a living. One night, Vanessa (Pacula) gets in his cab. Due to some political intrigue, she’s on the run from the murderous Quinn (Ironside). She tells Ben to drive her from Detroit to Seattle using “only the back roads” and she’ll give him thousands of dollars for his effort. Naturally, the worldly Belgian woman and the low-class shmoe forge an uneasy relationship, while dodging Quinn and getting into a few scrapes. Will they make it?

Michael Nouri, sporting some utterly ridiculous long hair, is not particularly likable as the motormouthed Ben. That’s an impediment to the movie. However, he does put in an energetic performance, much more so than he did in Overkill (1996). We also felt Michael Ontkean could have played this role. Interestingly, there’s a shot early on in the film of Nouri at a typewriter, with a rotary dial phone and a cigarette. Those three things alone would not be seen in a film today, much less all together. Strictly for preservation reasons alone, we felt that was the best shot of the movie.

Michael Ironside does what he does best - be sinister. He plays almost the exact same role here as he does in Watchers. Joanna Pacula provides the eye candy, and we can certainly sympathize with her having to put up with Ben, who frankly can get kind of annoying.

Aside from the prerequisite barfight, there isn’t a lot of action. Not that there’s necessarily supposed to be in a movie like this - but it certainly would have picked things up more. Where some scenes are needlessly talky, they could have put in an action scene of some kind. Sadly, they did not choose that route.

While it’s nice to see the three leads doing their thing, Black Ice is just a bit too bland to warrant a screaming recommendation.

NOTE: The VHS was released in both a rated and unrated version.

Funny, I actually got this film mixed up with another one called Blue Ice(with Sean Young and Michael Caine), "Blue" was definitely better.

dammit, when I saw the cover art I was absolutely sold...

Same here! That is why i purchased it...very disappointing.

I too was sold until I read the review. Thanks for saving me the time. I love Michael Ironside but not this much. I now have ACDC's Black Ice in my head...awesome!

Thanks for the great review.

I did actually like "Overkill" though, it had some pretty good fight scenes.

John: No problem, we wished it was better! AC\DC rocks!

Venom: About Overkill, Nouri was totally underused in the villain role. Aaron Norris should have made a couple more action flicks.

True, also, do you have any idea what the differences are between the rated and unrated version?

Not exactly sure, but the unrated does seem to have more semi-graphic sex scenes. Haha.

I do like that at least Ironside is featured prominently on the cover. Always need more Iron in your VHS diet.

True! He is the best part of the movie. Gotta love Ironside!

I skimmed the review because I'm looking to do it at some point too, but man, that star and a half rating isn't too promising.

We wished it was better. So much lost potential. Ironside deserved better. Michael Nouri is weak in it and he totally sleepwalks through this role.

I haven't seen this movie in well over a decade - but something about it caught me at the right time and i really digged it.
There was the barren snowy landscape, the awesome soundtrack - and that wistful ending.

There is NO copy of this anywhere online, is there anyway you could up it somehow man?

Sorry we can't upload it, but there are VHS copies on Amazon for as little as 2 dollars!