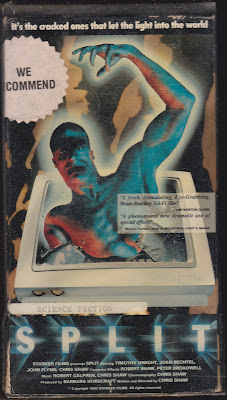 We’re not sure if it’s in the future or not, but at some point in time, two men against a black background control everyone on earth (or possibly San Francisco, again, not sure), with computers.  A man named Starker (Dwight) has managed to escape their “filing system”. Starker continually changes identities to try and avoid the master controllers, and meets some wacky people along the way, such as “The Artist” (Flynn), and Susan (Bechtel). Also, apparently, there’s a man with silver body paint who is the boss of the two men with the computers (?)  - it’s all very confusing, but that’s just the weird world of Split.

Split is filled with ideas - almost too many for its 85 minute running time. While we appreciated a lot of the ideas - the ones we could comprehend, anyway - and the fact that it’s sci-fi but has nothing to do with space or spaceships, this movie is far too disjointed and incoherent for most audiences to enjoy. Again, there are some movies out there with NO ideas, and those movies really suck, so at least there was a lot of effort put forth here. But it was mainly intellectual effort. If some time had been spent on making a barely-cohesive movie and some of the wildness was just put in some kind of order, Split might appeal to more people. 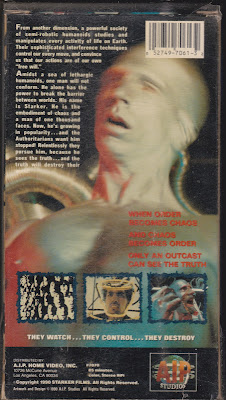 At least this is real sci-fi, as opposed to the crud on the “Syfy” network. And simply because of the student film-like enthusiasm, we want to give this movie the benefit of the doubt. But it’s just so confusing. And forget character development, that’s out the window. There are plenty of cool camera tricks and such, but that does not a movie make. It’s more a collection of scenes and effects, like director Chris Shaw wanted to show off every trick he learned in film school and worried he only had this one chance to do so, so he crammed ‘em all in, all other considerations be damned. Thus, this movie is literally all over the place.

It’s also very much an art movie, and what probably happened is, sci-fi fans and art movie fans don’t necessarily want to see the same things. This movie probably can’t appeal to both crowds, so it “split” the difference and pleased no one. Plus it has a very Overdrawn At the Memory Bank (1985) feel. On movie marquee alert, we see a theater is playing Poltergeist III (1988), and the movie starts with a musical cue very much like Billy Squier’s “The Stroke”. It’s all very hard to follow, but that was most likely the intention.

Once again we give props to AIP for putting this out. They went out on a limb here, knowing this...challenging...movie might not appeal to everyone and is pretty “out there”. Why they thought putting Silver Body Paint Man on the box cover front and center would draw in the video store patrons, we’re not entirely sure. We wanted to like this movie more, and we did like some parts of it, but more than likely it will give you a “split”ting headache.

I remember the "really" old video store days when there was no internet to give you an idea about these unheard of films. All a company had to go on was their box art so I can see why they went with the silver dude. Perhaps it was the most interesting choice to get people to rent.

The silver dude is pretty interesting, but he doesn't get much screen time.

As for this film, it sounds kind of interesting.

Totally agree about the Syfy spelling. It looks really stupid and lazy.

I did enjoy Mosquito Man and Larva.

I feel like this is the kind of thing that, if I saw it in the thrift store I'd snatch it up immediately, but at least with your review I've been warned.

It is a tough sit, but if you watch it, definitely interested in your opinion!