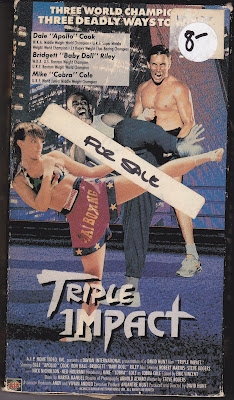 Dave Masters (Cook) and James Stokes (Hall) are buddies who make money on staged Punchfighting matches with each other. They have choreographed moves that the audience doesn’t know about. When a mysterious man, Karl (Hourani) approaches them about recovering a priceless treasure - a golden Buddha head - the two men agree to put their scam on hold and go on a jungle adventure. They recruit fellow fighter Julie Webb (Riley) to go along with them. Besides the fact they must dodge many perils to get the treasure, they must also contend with the evil McMann (Nicholson) and his team. They also want the head and will stop at nothing to get it. So jumpkicks, spin moves, and maybe an exploding helicopter ensue as the two camps attempt to retrieve the treasure.

We love Dale “Apollo” Cook. We’ve said it before, we’ll say it again. Why isn’t he making movies anymore? Where are you buddy? In this outing, he’s more animated than usual, and he displays a very childlike sense of humor in his role as Dave. Plus, his array of sweatpants, acid-washed jeans, and ever-present fanny pack add to his personal style. Throughout most of the movie - including the majority of his fights - he never removes the fanny pack. What could be in there? 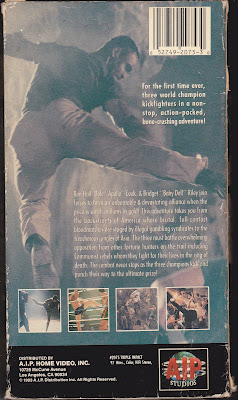 And speaking of national treasures who have great reaction shots (which we more or less were...), Cook’s partner in crime here, Ron Hall, is amazing as well. He also starred with Cook in Raw Target (1995), and is credited with stunts on The Quest (1996), but this is his strongest appearance we’ve seen to date. His acting style is truly one of a kind and demands to be seen. Plus he has some cool moves in the Martial Arts department as well.

Fan-favorite Nick Nicholson can proudly add this movie to his already highly-impressive filmography. Usually he appears in small roles and bit parts, but here he gets to chew the scenery as the main baddie. Bridgett “Babydoll” Riley has a fruitful career in stuntwork, and this is one of her few movies as an actress. She’s obviously an integral part of the Cook-Hall-Riley “Triple Impact” team (not to be confused with the mere Double Impact which not coincidentally was released only the year earlier, in 1991).

What’s interesting here is that this movie seems to be inspired by the Chuck Norris movie Firewalker (1986). There are some definite similarities. But the fact that Triple Impact is an adventure film cross-pollinated with a Punchfighter is a unique blend that you don’t see too often.  Like another Cook film, Fist of Glory (1991), this starts off as a Vietnam jungle movie in a prologue (not forgetting an exploding hut or two), then moves to Punchfighting/adventure.

Both Cook movies integrate more than one action movie scenario. As this is another Davian International production (who made most of Cook’s output), if you’ve seen other Dale “Apollo” Cook movies, this follows stylistically. Plus any movie that has on its box this credit: Mike “Cobra” Cole as “Cobra Cole”, you know it is worth seeing.

Besides the funny faces and enjoyable dumbness, there’s a great training sequence featuring a song we believe is called “Fight To Win”, but sadly we don’t know for sure, and we don’t know the artist that created this great tune, because there is no credit for it. Oddly, the sound quality for this song is extremely poor and it sounds like it was recorded on a tape recorder. But this song/sequence is a movie highlight nonetheless.

Triple Impact is probably second, after American Kickboxer 2 (1993), for our favorite Dale “Apollo” Cook movie. Thank you AIP for releasing it.

You are digging out some awesome AIP action recently Ty, this looks great! Anything with Nick Nicholson in it has got to be gold.

*** 1/2 stars?! Definitely need to check this one out then sometime.

Whoa, second to American Kickboxer 2 for best Apollo Cook? Sign me up.

This was a blast! Dale was at his wooden best and Ron Hall was great too.