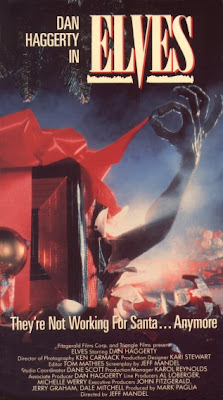 Kirsten (Austin), and her friends Brooke (Lichstein) and Amy (Dye) are group of young gals interested in the occult. They call themselves “Masters Without Slaves” and go to the woods at night for seances and things like that. And no wonder, as Kirsten’s family is quite the creepy lot, and her younger brother Willy (Graham) is a perverted little brat that likes to dress up like Donatello from the Teenage Mutant Ninja Turtles and peep on her in the shower. As is wont to happen, the group of girls accidentally unleash a malevolent Nazi elf into the town at large. As part of a breeding experiment, the Nazis did various experiments using not guns, not bombs, not planes to take down their enemies, but elves.

Meanwhile, unemployed ex-police detective Mike McGavin (Haggerty), who is so down on his luck, he’s evicted from his trailer, reluctantly accepts a job as a department store Santa Claus on Christmas Eve. But those mischievous girls are camping out in the department store that night waiting for some boys to appear. But there’s another unwanted guest - here’s a hint: it’s a three-letter word, and it’s not “imp”! But to destroy this nasty elf, McGavin will have to unravel a complex web of history, deceits and lies from Nazi elf experts. Will he and Kirsten live to see another Christmas? 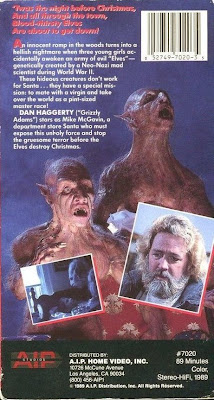 Ah, Elves. Such fond memories. This is one of the first (if not the first) AIP’s we’d ever seen. Needless to say, we were hooked. The plot of the movie is just so endearingly bonkers, you can’t help but love it. Anyone who would release this gem into the world should really receive our thanks. It’s packed with nutty ideas, hilarious dialogue, enjoyable fun, and a Nazi elf. Yes, just one elf. The title is a bit misleading. But we, as the audience, are treated to “elf vision” as he’s walking around, so we can see the world through the eyes of this lonely, but murderous, elf.

National hero Dan Haggerty is at his absolute best here. He continues his tradition of great sweaters, and, somehow, his beard actually matches his sweater selections. And his pinky ring. But who else could bellow “Tell me the connection between the Nazis and the elves!!!” with a complete straight face and utter conviction like Mr. Haggerty. We salute you, sir. Pretty female lead Julie Austin has quite a career under her belt, having also appeared in Night of the Wilding (1990), Twisted Justice (1990) and Extreme Justice (1993).

Taking some of its cues from Dawn of the Dead (1978), but others from God-knows-where, Elves is a strong contender for best Christmas-themed horror/unintentional (?) comedy ever. This extremely enjoyable and fun outing shot in Colorado in the golden year of 1989 should be in your collection. “Dan” we now our gay apparel and watch Elves tonight, even if it’s not Christmas.

Also check out our buddy, The Video Vacuum's funny review!

How have I gone all these years without seeing this?! Can't believe there's another film in the spectacular "mall horror" sub-genre, along with Dawn of the Dead and Chopping Mall.

Sounds like silly fun, i'll definitely be seeing this one! Another Dan Haggerty film i'd be curious to see your thoughts on is "Love And Dynamite"

Robert: Don't feel bad, many people miss this classic. Consider this chance to fill in this gap in your collection. Thanks for your comment.

Venom: Would love to see that one, it is hard to find. We will keep an eye for it. As far as Elves, you're right, it is pretty much the definition of silly fun.

I've been wanting to check this out for years. Not sure if we got a tape out here, though I've seen the US tape on eBay frequently.

Hopefully you can purchase a U.S. tape soon. Would definitely be interested in your opinion on all the wacky Haggerty madness! Haha.

Excellent review. '"Dan" we now our gay apparel.' Love it.

My friends and I have gathered every year on Dec. 23rd to watch this. It really works best with a large group and plenty of alcohol. This year will be our 20th anniversary of watching it together. Hopefully the tape will last another 20 years.

Thanks! What a amazing tradition. Watching Elves puts everybody in "the spirit of Christmas".

You can get Love And Dynamite pretty cheap on Half.com

Thanks for the tip. Appreciate it.

I love the "I am your father (and your grandpa too)" moment. Such a kickass movie and excellent review.

Thanks you so much, that is one of our favorite moments too!